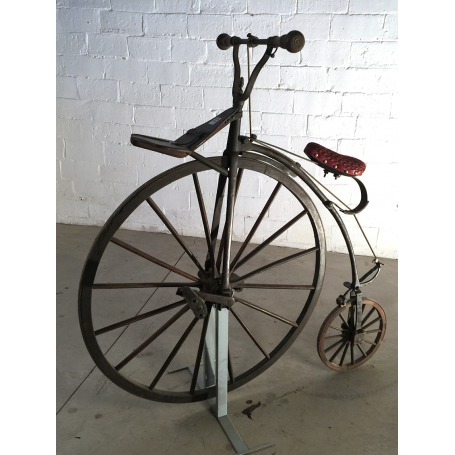 APPRECIATIONS: Velocipede collection in wood and hardware. The wooden wheels have been equipped with a tire iron. The car is ready to ride and has been stored correctly.

EXAMINATION OF RESTORATION OR DAMAGE: do Not have. Old restoration.

Velocipede (Latin for "fast feet") is a comprehensive term for any ground vehicle human-powered with one or more wheels. The most common type of velocipede today is the bicycle.

The term was coined by frenchman Nicéphore Niépce in 1818 to describe his version of the Laufmaschine, which was invented by the German Karl Drais in 1817. However, the term "velocipede" is today, it is mainly used as a collective term for the precursors of the different unicycle, the bicycle, the tricycle and the quadricycle developed between 1817 and 1880.

The velocipede, formed by a kind of trestle, with two or three wheels, and that moved by means of pedals who was mounted on it. It is considered the forerunner of the bicycle. Karl Drais, June 12, 1817, presented to the society the laufmaschine, German for "machine-andante", now known as draisiana (in honor of its inventor). In 1863, the inventor Pierre Lallement improved in France the invention of Drais adding the pedals, the velocipede with two wheels is called sometimes in English boneshaker (tumbling bones). The company Michaux was the first to mass-produce the velocipedo, from 1867 to 1870. It has, however, reports that mention the English scientist Robert Hooke the inventor of the velocipedo in the SEVENTEENTH century. The vehicle described was propelled without horses.

In November 2017, the Spanish company Torrot, makes a nod to the history and retrieves the name Velocipede to a new segment of urban mobility. An electric vehicle with three wheels interconnected with 150 km of autonomy, with two modes and customizable. A model two-seater approved for driving without helmet, safety belt, and another model charge you if you need a helmet. This vehicle is manufactured in a new plant of the company in Cádiz (Spain) and is sold through its website.

26 other products in the same category