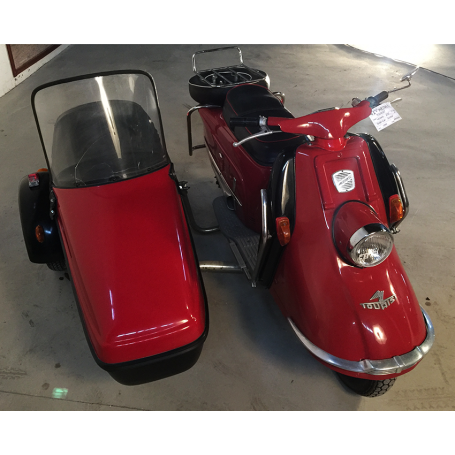 IF you have documentation we would have to do a registration history. (Custom quote with our manager).

EXAMINATION OF RESTORATION OR DAMAGE: Not significant. Very good condition in general except for the breakage of the defense of the air pressure. Old restoration. In operation, tested. Lack of cleaning and lubrication from lack of use.

The Heinkel Tourist is a scooter made by Heinkel Flugzeugwerke from 1953 to 1965. Is manufactured and sold more than 100,000.

The Tourist was sold as a scooter luxury. It was more expensive than a Vespa or a Lambretta , and was generally heavier, more comfortable and more stable. It was available with a speedometer, a steering lock , a clock, a luggage rack and a spare wheel. It was referred to in England as "The Rolls-Royce of Scooters" and was advertised by a dealer in Massachusetts as "The Cadillac of Scooters".

The engine of the Tourist is mounted on the frame and drove the rear wheel by a chain enclosed in the swingarm . Thus protected, the chain ran in an oil bath seal, extending its useful life and preventing the oil from coming in contact with the scooter or the rider. The engines used in Heinkel Tourists were 4-stroke while most other scooters of the time, including the Heinkel 150 light scooter from the 1960s, had 2-stroke engines.

The first prototype of the scooter Heinkel and was built in 1949. The production of the tourist began in 1953.

In June 1954, the electrics were upgraded from 6 V to 12 V to accommodate the addition of an electric starter at that time. The production of the 101 A0 was finished two months after. Built 6.500 tourist 101 A0s.

The production of the series 102 A1 began in July of 1954. The main changes with respect to the 101 A0 were the larger engine, which had been bored, and had petted up to a capacity of 174 cc (10.6 cu in), the absence of a starter motor and use the electric 12 V and an electric starter as on the last of the 101 A0s. It included a glove box behind the protective legs. The speedometer was mounted in the glove box.

It is stated that 34,060 Tourist 103 A0s were built before the end of production in September of 1957, but this production figure is disputed.

The production of the series 103 A1 began in September of 1957. The handlebars are tubular of the previous series were replaced by a handlebar with a cast that contained an instrument panel. The engine, although still the same in size, was improved by the use of a crankshaft on two bearings. The engine was now mounted to the frame with rubber mounts, improving the march.

The production of the final series of Heinkel Tourist, the 103 A2, began in August 1960. The telescopic forks of the previous series were replaced by a fork of two sides of the link at the end of the series production A2. The rear panel of the bodywork was redesigned and was not interchangeable with the previous series.

All the scooters tour were powered by engines with a single valve, four-stroke valves general .