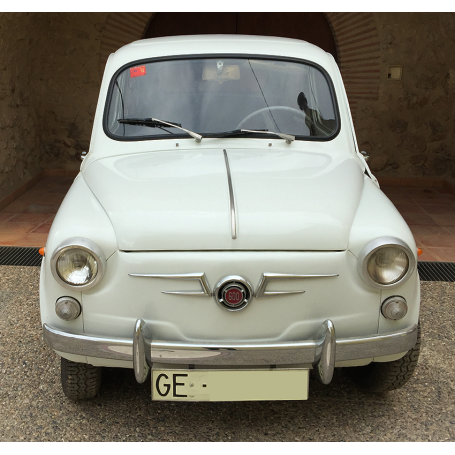 FINDINGS: a Lack of a tune, and it works perfectly, the state in general is very good. Paint is original white color, interior in very good condition and original, original tires with tires...overall is in good condition. Taking into account that you have documentation, that the instruments of the interior are original and complete.

IF you have documentation we would have to do a name change. (Custom quote with our manager).

Last SEAT 600 L series Special of 1973. For purposes of model identification, note the air vent triangle black on the C-pillar, specific for the 600 L Especial. The 600 E and 600 L were the last versions that were manufactured.

The SEAT 600 (also known popularly as" six Hundred, Pellet, Seílla or Seíta) is an automobile of tourism of segment To produced by the Spanish manufacturer SEAT between the years 1957 and 1973. Was built under license of the Fiat on the original Fiat 600 designed by the Italian Dante Giacosa. Fiat 600 original presented at the Geneva motor show of 1955. It was probably one of the cars most iconic and beloved of all the production SEAT, as it was his first car but the majority of spaniards.

In Spain first were imported some units of the Italian model, the Fiat 600, but soon the factory SEAT started the own production on the basis of this model, under agreement with the Italian company Fiat. This model was bought mainly by the middle class, Spanish, which I could not access vehicles, high-performance.In 1957, went on sale in Spain for the price of 390€ (65.000 pesetas of the time).

Of the 600 were manufactured a number of different versions, known as Normal, D, E, and L Special non-counting versions like the commercial, the convertible, the Formichetta, etc

The masking Catalan Coast made a design with 30 cm more of battle to equip it with four side doors, that was baptized as SEAT 800. He had relative success and was a Spanish contribution to the original designs.

By 1955, the year in which is presented the model at the Geneva motor show, Carlo Abarth did not think that the 600 would be the model most important for your story. This car was taken by Abarth to do a lot of preparations and developments sports until 1971. To work on the development of the 600 so-called "poisonous", Abarth built a new plant in Turin, in the 38 of Corse Marche; where there were cars full of thousands of special equipment to prepare 600 series for the competition.

In Spain, there were other preparers of SEAT 600 for the competition, among which highlighted the family Juncosa, in addition to Conti, Nardi, Autotécnica and Speedwell.

Production and decay of the model

The marketing of the SEAT 600 decreased gradually, by the increasing competition of other brands ' models more attractive to the consumer. For example, the Renault 5, with an aesthetic more modern and better security systems, quickly became popular on the european market.

Another reason for the cessation of the production was that the B-pillar of the 600 was weak and narrow, making it difficult to properly install the seat belts when they became mandatory in Spain.

Despite having had several redesigns, the 3 of August of 1973 ended the production of the SEAT 600. The workers of SEAT, fired the last 600 with a banner that read: "you were Born a prince and die a king"Until 1973 were manufactured 799.419 units in the factory of the Zona Franca of Barcelona, of which in 2007 were still about 10,000 in circulation.

The mechanical characteristics of the 600 And are identical to the last version of the 600 D. These versions differed in details of interior finish and, above all, in the opening system of the doors (to the front), as well as by its large headlights and older pilots back in the E, and by the different front bezel.

In Spain were produced several versions derived from the 600:

They also had derivative instruments that were companies and preparers as Serra, Siata...

In Spain it is considered that the 600 was the car that motorized the country. For this reason , after many years, he has been honored to with monuments.

In 2008 opened its first monument in the locality of malaga to Fuengirola.

In 2011, it became another monument with 2 SEAT 600 in a roundabout Churriana The Vega (Granada).

In 2015, there is placed another monument in a small roundabout of Martos (Jaén).

The only problem with the 600 is the cooling. According to its inventor, the Italian engineer Dante Giacosa, was the biggest problem they faced when creating the car. His solution was: check the radiator and carry tightens the fan belt.