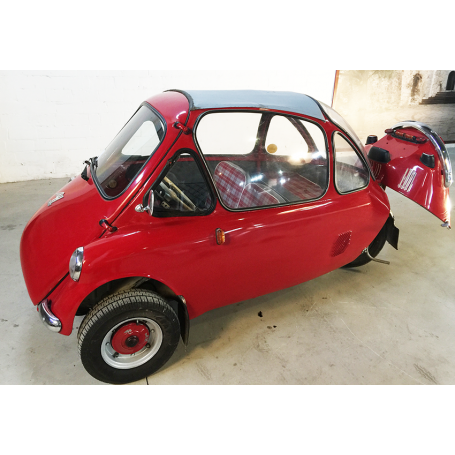 ASSESSMENTS: We have done a tune-up, and it works perfectly, the state in general is good. Scuffs in the paint, interior is worn, tires despintadas, gums dried up...in the set to be original is acceptable. Taking into account that you have documentation to be able to transfer it to Spain and to the book of instructions of time, with plans of the electrical part. New battery. 3 Keys original.

EXAMINATION OF RESTORATION OR DAMAGE: Wear and tear and obsolescence. Original model. Sheet metal and paint with peq. Desconches.

Heinkel Kabine, the Isetta improved that I didn't want BMW

The Isetta is the microcar's most popular story and the Heinkel Kabine was inspired by him to offer a more economical alternative, lightweight and efficient, but with the same charm. We have sold thousands of units around the world.

Manufactured initially by Iso Rivolta, the Isetta was presented at the Geneva motor show of 1954 and drew the attention of BMW. The signature bavarian bought the license and the diamond in the rough that was the Iso Isetta was transformed into the microcar world's most popular BMW Isetta.

Since then, the Isetta did not go unnoticed in Geneva. In that same Room the charming car bubble has also attracted the eyes of Ernst Heinkel and his expert eye saw great potential in that little car with egg-shaped. Immediately he thought that he could offer a concept even better.

The small motor housed in the rear

Heinkel had a wide experience in the field of aviation and through his company Heinkel Flugzeugwerke was devoted to the construction of military aircraft during the Second World War. Their innovative airplanes were well appreciated, and among other achievements, yours is the first jet in history.

After the war were banned from the German company's manufacturing of planes and had to reorient its business. Since then he began to develop engines for other automobile companies and to the manufacture of motorcycles with a growing success. In the 50 years your bike Heinkel Tourist was a large commercial demand.

Venture into the manufacture of microcar had a lot of interest due to the large demand for this type of vehicles throughout Europe and especially in Germany. But the Heinkel Kabine, the first car of the brand, was not going to be a simple copy of the Isetta: it had to be higher.

In 1956 he introduced the Heinkel Kabine with three wheels and an aerodynamic design bubble-type who sported a front door, huge glazed surfaces and an extension of the cabin that housed the motor. Its picturesque image looked like a hybrid between two of the microcar more famous the look the front of the BMW Isetta and the rear of the Messerschmitt KR200. In fact, the resemblance of the Kabine with the Isetta caused a series of disputes between Heinkel and BMW.

The compartment was accessed by the large front door that opened to the front face of the driver and front passenger. In the Isetta the door also serving on the steering wheel, where pivotaba the steering column, but it was a patent that the Kabine could not use and resorted to a direction anchored to the ground traditional. Ernst Heinkel wanted no more trouble with BMW.

We resorted to the engine of a single cylinder from the motorcycle Tourist. Although this mechanism was smaller than that of the tiny BMW performance would be similar. Unlike his rival and source of inspiration, the Kabine resorted to a lighter unibody structure. In this way, the empty weight was around 250 kg, 100 kg less than that of the Isetta.

The body was a mere 2.6 metres in length and accommodating in its interior to two people. Under the seat is concealed a spare wheel. The sun roof was of canvas for aesthetic reasons and also practical: in the case of a frontal crash, the door could be badly damaged and in that case, the roof served to get out of the vehicle.

With three and four wheels

The tiny rear wheels of the Kabine 154 were close together

Another significant detail is that the Model 154 had four wheels while the 150 and 153, there were only three. The design didn't look much affected by this circumstance as the two wheels of the rear axle of the Heinkel Kabine 154 were very close together, but allowed it to offer greater stability.

The transmission is entrusted to a change four-speed manual plus reverse gear, an important detail since many microcar had no reverse. The lever is located to the left of the driver, near the pass of inner wheel, unlike the Isetta, which had a long lever traditional that emerged from the soil.

The public responded very well and the sales were in full swing. The Heinkel Kabine was a certain charm, the engine of the popular motorcycle Tourist had a reputation for reliable, cost less than an Isetta and, thanks to being a featherweight, it was the car that least consumed of your class. But despite the success, things have radically changed in 1958.

The front view reminded the Isetta

In January of that year Ernst Heinkel left this world, and in June he made the last Kabine. Even in trials with BMW for the rights of the Isetta, the company decided to go back to his origins air after being abolished the prohibition of the manufacture of aircraft. In fact, after several mergers, the company Heinkel is now part of the large consortium aerospace EADS.

The end of the Heinkel Kabine in 1958 had several sequels. The irish company Dundalk Engineering purchased the license and made the car during that year. In 1960, the license was for the british Trojan Cars, which it marketed the car as the Trojan 200 until 1966 with versions both with steering wheel to the left and to the right.

The car bubble German also came to Latin america of the hand of the argentine company, The Cedars, which sold between 1960 and 1965, and even dared to launch variants of pick-up and cabriolet. In total it sold some 27,000 units across the world of which 11.975 were made by Heinkel for the German market and the rest were manufactured under license.

13 other products in the same category