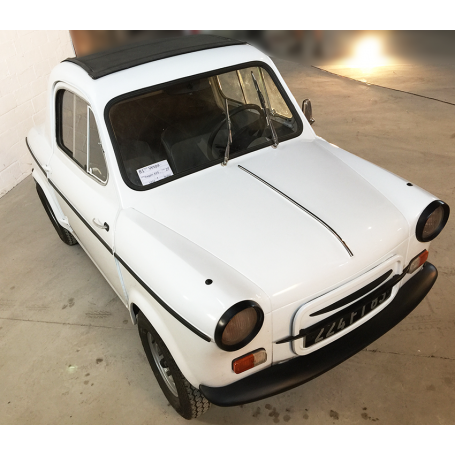 APPRECIATIONS: We have made a review, it works perfectly, the state in general is good. Scuffs in the paint, a desconche (see photo). Interior worn out would have to tapiar of new, original tires, set to be original is acceptable. Taking into account that you have documentation to be able to transfer it to Spain. There is No key.

EXAMINATION OF RESTORATION OR DAMAGE: Wear and tear and obsolescence. Original model. Sheet metal and paint good. Psed. In one of the rear indicators. (see photo). Lack battery, downloaded.

The Vespa 400 was a microcar produced by the French manufacturer ACMA (Ateliers de Constructions de Motos et Accessoires) in Fourchambault, France, from 1958 until 1961, according to the designs of Piaggio. It was available in two versions, "Lusso" and "Turismo". Swept away by the resounding success that was taking the star product of the house, the Vespa launched in 1946, one of the sons of the founder of the Company, Enrico, decided to take a leap and venture into the world of the automobile, creating this microcar.

However, the model had a little success and barely stayed a few years in the market, in part due to the pressure against the own Fiat that he did not want a competitor for their model 500.

Basically, the car was a two seater with a small space behind the front seats to carry two children at a young age or, optionally, a meager luggage. The driver and his companion sat in a simple two-seat tubular wrapped with elastic fabric and between them is placed the hand brake and the choke. The gear change lever, for its part, was placed in the center of the floor.

The box of instruments was very simple and contained a speedometer as well as a few indicators, namely: intermittent, load of the dynamo, headlight and warning of low fuel. There was a convertible version that had a roof rolling back, by a rail located on the ceiling and he would fall on the rack of the rear engine.