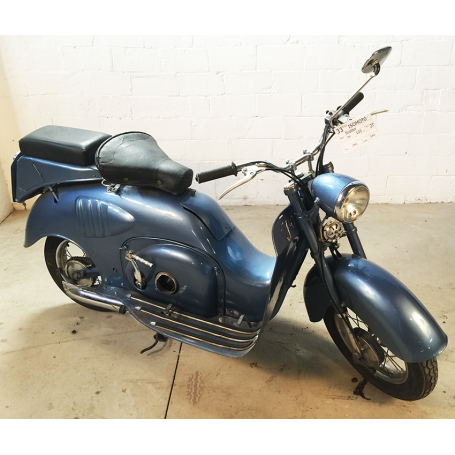 If you have documentation we would have to do a recovery. (Custom quote with our manager).

EXAMINATION OF RESTORATION OR DAMAGE: Not significant. Good condition in general. In operation, tested.

This company, which was founded by Renzo Rivolta , was devoted initially to the construction of large thermal installations and the production of refrigerators.

In 1948, it introduced the scooter Furetto of 65cc , but it was not a great success. In 1950 he was succeeded by the dual-piston 125cc -Iso scooter. This model was a great improvement in terms of construction, with a telescopic fork at the front and a swing arm rear, the ride characteristics are greatly improved. Next to the scooter appeared a motorcycle of 125cc, the Isomoto 125. This model had, in addition to the plate, many features of a scooter, as the smaller wheels. In 1952, the Iso 200 followed with a two-stroke engine of 200 cc , four-speed and a transmission shaft , but with a piston playing in the back. This machine delivered 10½ hp at 4,800 rpm and had a maximum speed of almost 100 km / h. The wheels now had a diameter of 15 inches . In 1954 , the engine was increased to 236 cc, giving as a result the Iso to 250. This engine 236cc also used for car dwarf Iso Isetta that went on the market in 1955 . In 1955 Iso came with a moped 49cc, Isociclo. In addition, they delivered the scooter to Iso 125, the Isomoto 125 Gran Turismo, the Isomoto 125 C, a model of 250cc and the Isomoto And with an engine of 150cc. In 1956 followed a model of four times , the Iso 175. In 1957 , he appeared a scooter completely new, which was very similar to the models of Vespa and Lambretta . This scooter also has a new engine of 150cc. In 1959 they delivered a new version, with a double seat .

Renzo Rivolta decided to promote the sports car Iso Rivolta more and that is why the production of two wheels stayed in the background. However, in 1961 there was a boxer engine four-cylinder and four-stroke 499 cc . This model had an electric starter and was presented during the auto show in Milan , but never went into production.