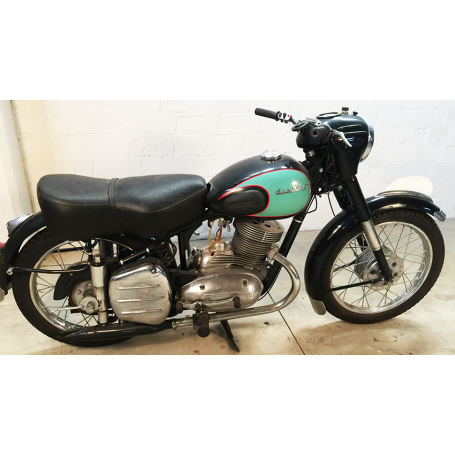 Derbi was a Spanish manufacturer of motorcycles since 1949, currently member of the Italian group Piaggio.

The origins of this brand date back to 1922, when Simeon Rabasa i Singla was devoted to the repair of bicycles. After the civil war, the production continues to increase. Establishing the first contacts with some of the factories of bicycle most important in the country, which crystallize in the production of chassis for mopeds and small motorcycles.

In 1944 Simeon, along with his brother Josep, creates the brand Bicycle Rabasa. It was not until the year 1949 when Derby decided to begin his career in the world of moped, creating what would be his first bike. It was the velomotor Derbi SRS) which correspond to the creator of the brand. This bike had an engine of 48 cc and 1.5 hp. The success of the SRS (initials of Simeón Rabasa i Singla) is indisputable, and in the early 1950's BICYCLE RABASA is converted into NACIONAL MOTOR SA, which presented in the Fair of Samples of Barcelona a new model: a motorcycle of 250 c. c. and 9 cv., inspired by the Jawa 250, but with a good number of own contributions, it was called the DERBY, a contraction of the expression DERivado of Bicicleta and be manufactured for a little over 10 years.

The factory was in Martorellas (Barcelona) and it has been visited among other pilots, Angel Nieto, Pol Espargaró and Joan Olivé. The last moto derbi came out of that factory in April of 2013, Piaggio moved the production to Venice.

Nor missed the boat, with the Canoe D-6, equipped with a 6 cylinder engine in V.

In 1961, after the launch of the Seat 600 the sale of motocicletes high displacement drops sharply, so that Derby is focused on models with engines 49-75 cc.3 One of the first creations in this sense are going to be the 49 Sport and Gran Sport, mopeds to 48.7 cc, 1.5 HP at 5,000 rpm, 3 speeds, drum brakes, foot pedal and hydraulic gearbox.

This light bike, after some modification, it will be renamed in 1965 as a Torch , and sell half a million units, so only in Europe. In Spain that model has had great acceptance and was popularly known as the Derby Palette.

Also in the decade of the 60's appeared the models:

In the 70's Derby is going to venture in the field of enduro with the Coyote 49 and 75cc, the Roadrunners and the Cross 50, filed after versions 74 and 74TT. The range of enduro Derbi Diablo will end up with the C4 in 1978.

While, for those years are going to prioritize the sector of road: in 1972 appears the Racing Client 50 cc, with 15.5 HP at 15,000 rpm, air cooled engine 6 speed gearbox and a maximum speed of 165 km/h thanks to its lightness. The food was by carburetor 24mm IRZ of rotary valve, piston Mahle and electronic ignition Motoplat. This small racing car for speed runs was sold for 35,000 pesetas of the time.

In regards to the mopeds, in 1977, will come out the Variant and the innovative Spacetronic, a device that allowed you to start it by pressing a red button on the box of instruments, and that has become the standard for all scooters and almost for all the bikes.

During the last years of the decade and the beginning of the next, and unlike other builders catalans as Bultaco, OSSA or Montesa, Derbi will get successfully grappling with the challenges of macro-economic that accompany the Spanish transition and the entry of Spain into the European Union.