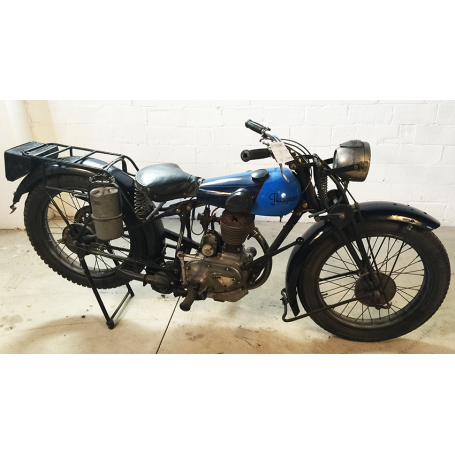 You do not have documentation, we would have to make a historical. (Custom quote with our manager).

Model full original except the paint. (Custom quote with our restorer in our workshops).

EXAMINATION OF RESTORATION OR DAMAGE: Not significant. Good condition in general, deterioration due to lack of use, patina of time, part electric complete nothing serious. Old restoration. Good restoration project.

Of the NINETEENTH century

In 1810, the pact Jean-Pierre Peugeot, a weaver of Herimoncourt himself with his two sons Jean-Pierre II and Jean-Frédéric, his brother Jacques Maillard-Salin, in Sous-Cratet a casting produced was that the rolled steel for tools and watch springs became. In 1819, after an injection of capital, the company was named "Peugeot Frères et Cie". In a short time there were 70 employees. In 1825, the company has grown considerably and has changed the name to "Societe Peugeot Freres AINES, Calame et Jacques Maillard-Salins". In 1832, Jean-Pierre II was separated and began the firm of "Peugeot Freres AINEs". However, he quit the initiative in the hands of his son and his nephew Jules Emile.

In 1871, he restructured the company and took the initiative in the hands of two cousins: Eugene , the son of Jules, and Armand , the son of Emile. In 1878 changed the name of "Les Fils de Peugeot Frères" (the sons of the brothers Peugeot). Until 1885, the company experienced a great development and made a name for himself as a manufacturer of all kinds of tools in several european markets, but also in the US, Turkey and Egypt.

In 1882, Peugeot made its entry to the transport market: Armand Peugeot took the initiative of bikes to build. The "Grand Bi" (the French name for the plant was in Beaulieu -cumin ) did. In 1889 Armand Peugeot showed four tricycles with a steam engine from Leon Serpollet in the Universal Exhibition in Paris , the Peugeot Type 1 . This tricycle was suitable to carry two people. Armand had, however, already had a visit shortly before the exhibition Gottlieb Daimler and Emile levassor found . Sought, after the death of Edouard Sarazin , French concession-holder of Daimler engines and new customers can't be convinced Armand to the vapour, but the atmosphere of the engine was the future. Panhard , co-founded by levassor found, how the chassis to offer. The first car from Peugeot was built in 1890, with a Peugeot body mounted on a chassis and Panhard with a Daimler engine. In 1891 the production of Peugeot cars took off and the number of models expanded.

At the beginning of the twenties Peugeot wanted to bring a bike affordable in the market. Therefore sought collaboration with Alfred Vurpillot, which had now become the owner of brands Terrot , Magnat-Debon and Cottereau . They wanted the Type To Terrot sell. Under the name of "Peugeot" Terrot had its own fork of the property, which, however, remained subject to their own motorcycles, which Peugeot had yet to apply. Simple leaf spring fork in Addition Vurpillot produced very few motorcycles.

The new company already took in 1927 a new model with engine block in the market, which initially caught 350 M, but soon received the name of P 104. A lot of news was not under the sun: the engine of the side valve was still the Antonesco, and the gearbox was an existing Zedelge design. The machine was heavier and more expensive than the competitors, as though it was under the brand names sisters also Aiglon (504) and fawn (G-504) was released, there were more than 2,000 produced. However, the engineer Milone developed new, lighter four-stroke engines 175 to 250 - and 327 dc, P 109, P 110 and P 111 will hit the market. P 107 and P 108 were 250 cc valve side .