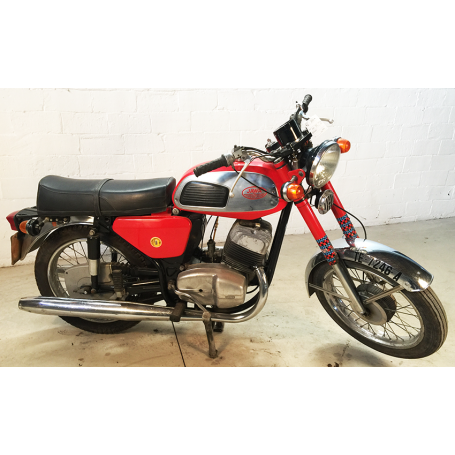 IF you have documentation we would have to do a recovery. (Custom quote with our manager).

In 1973, Jawa Týnce nad Sázavou, presented the motorcycle Jawa 350 type 634 . The motorcycle was manufactured in the 70's and 80's of the TWENTIETH century , The engine was taken with minor modifications from previous types of Jawy. It was a motor air-cooled two-cylinder two-stroke, a little tested, with an offset of 343.5 cm3. This engine was produced initially without lubrication separately (Jawa - Oilmaster), so the oil had to adhere to and mixed directly with the fuel.

The other parts of the engine have not been specifically altered. The clutch remained the same as the previous models, only the friction lining was made of a more durable material, the product np Osinek. In addition, the design and the modifications in technology have increased the useful life of the transmission.

Another important change was the carburetor in which is inserted another main jet, and there was also a new adjustment of the carburetor. It was a carb of type Jikov SBDB 2926.

The chassis also made many changes to the jaw 350/634. The box of the rear fork has changed completely. Is closed and three quarter double. It was a tested structure taken from the paintings of motorcycles Jawa succeed and is protected by MS. patent front fork was taken from earlier types, but the fork bottom beam is characterized by a greater rigidity.

The fuel tank was new with a higher volume. The saddle is double, anatomic, with lock. After removing the seat, placed a battery and other accessories in the center of the seat. On the right side of the box is the tool, the left side is for the free storage of souls to spare and other equipment needed.

This motorcycle has a speed of one hundred miles, and could maintain it with security. With its driving characteristics, was able to cope with the worst roads and road surfaces.

Among the positive features of the motorcycle are the frame particularly stiff, very good driving characteristics, a certain follow-up even in turns, natural position of the driver and the airbag, a sufficient volume of the fuel tank, easy maintenance, construction, and processing solid, team rico, and the secondary strand was completely covered. On the contrary, the negative characteristics include a relatively high weight, a high build in general, front forks soft (often achieved), access is very poor to the nuts, a focused hard, a chair narrow, a braking efficiency average and rigidity to the box low.