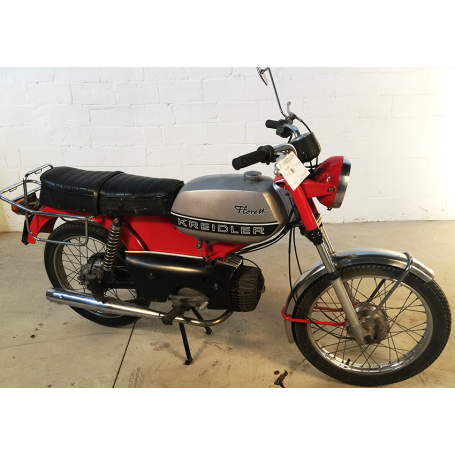 The Kreidler Florett RS was a series of models of small motorcycles with two-stroke engines of Kreidler , which was built from 1967 to 1981 in more than 125,000 copies. The Florett RS was the machine Kreidler fastest and, along with the Hercules K 50 and the Zündapp KS 50, was one of mopeds most popular of its time.

Vehicles are not subject to registration by law and, therefore, are tax-free , but must have a permission of general operation and to carry a number of official registry.

The class created in 1953 of speed is not limited 50 mopeds are allowed to drive with the license of the class-4 (minimum age 16 years). With a new regulation in 1960, they removed the weight limit as well as the regulations on the diameter of the wheel and possibly the radius of the crank of the pedal and mopeds could be designed as motorcycles. In order to avoid the growing career of performance, the three leading manufacturers of the market, Kreidler, Hercules and Zündapp decided in 1970 to limit voluntarily the power of the open class 50 cc (no speed limit) to 6.25 bhp and a manual gearbox with a maximum of 5 gears.

The Florett RS of the years of construction from 1967 to 1970 had, for the first time the typical two-stroke engine, air cooled Kreidler type B 15/6 with ignition by magneto 6 volts. The unique cylinder with lubrication mixture 1:25 had a diameter of 40 mm and a stroke of 39.7 mm carburetor With a Bing of 18 mm, the engine produced 5.3 horsepower at 7250 rpm, giving a maximum speed of 80 km / h with a box of changes of five speeds connected by claw.

In 1970, the engine B 15/7 appeared with 6.25 hp at 8500 rpm, which allowed a maximum speed specified factory of 85 km / h. Due to the "Agreement for the suspension of work," of the German manufacturers, always asked for RS, only for this value. To 79 dB (A), the noise of driving reached the highest value of all the engines Kreidler.

All Florett RS had a steel frame press , hydraulic-telescopic front forks hydraulically cushioned and a swing arm rear with two struts damped hydraulically, a distance of 110 mm in the front and 95 mm at the rear. 1972 appeared the chassis RS revised (wheelbase 1215 mm instead of 1205 mm) with tires 17-inch (instead of 21 inches) in the dimension 2.75 and brake drums enlarged from 160 mm (instead of 150 mm). In 1976, he installed a disc brake of 208 mm in the front wheel (model RS-S ). The empty weight ranged between 83 and 86 kg, according to the model, and the total weight permitted was 245 kg seat height was 78 cm; footrests rear of the foil RS two seats were joined to the rocker. The tank capacity was 12.5 liters. The consumption was given as a 2.4-litres per 100 km, which allowed a considerable range. The models Florett RSH were delivered with handlebars higher.

While the motor was built almost unchanged for nearly a decade, the details of the equipment and the combinations of colors were added to the mid-70's. In 1974, he installed a system of flashing model ( RS-B ), 1976, the power installed in the cabin, 1977 alloy wheels (model RS-G ) and 1979, and rectangular headlights were used. The original Florett RS were delivered initially in red volcanic , 1970 came to Orange , in 1974, Signal yellow , 1976 Golf Green and 1979 Metallicsilber the color standard, the tank always remained in chrome .