Thanks to the collaboration of Artsvalua.

Although old, it is a pleasant news to have been able to do our bit for the resolution and return to the national patrimony the pieces that never would have left the cathedral of Murcia.

Although thanks to it they return to their place totally restored in their splendor of the first day. 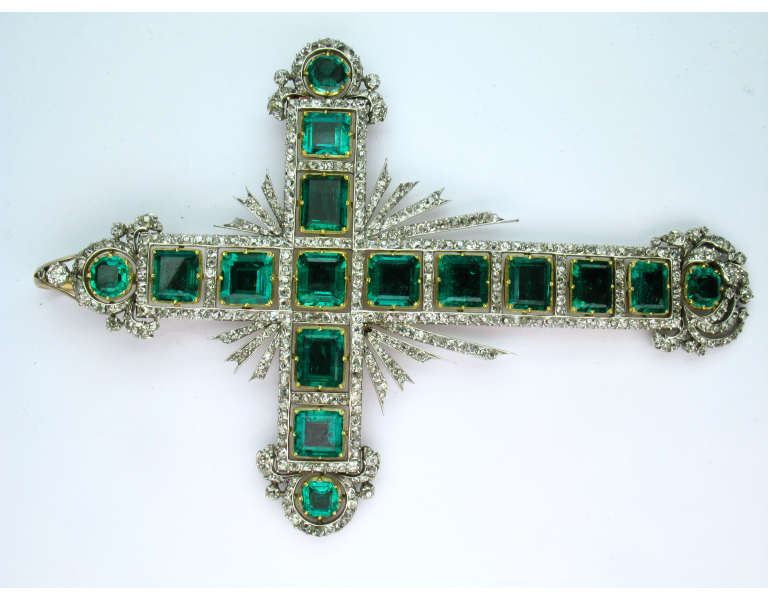 Two Murcian students find on YouTube a cross stolen from the cathedral 39 years ago.
The investigation initiated by Juan Manuel Rodríguez and Antonio José Gil has also allowed finding a 19th century necklace
Both belonged to the treasure of the Virgin of the Fuensanta and had been subtracted from the cathedral of Murcia in 1977 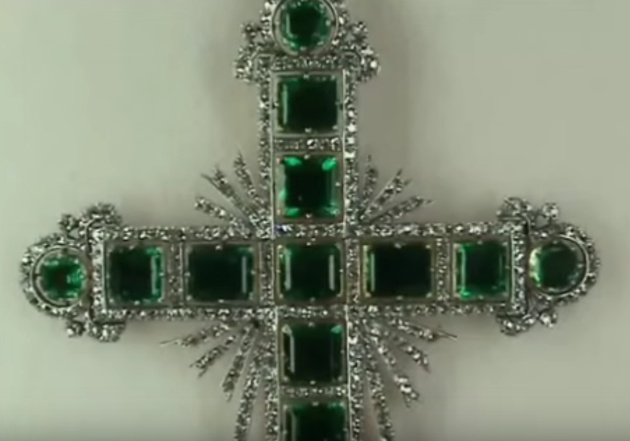 In 1977 the theft of several pieces of great value belonging to the Museum of the cathedral of Murcia - known as the treasure of the Virgin of Fuensanta - shocked the archbishopric and citizens. Almost 40 years later two of these pieces have been recovered thanks to the good eye on YouTube of two young students of History of Art. Juan Manuel Rodríguez and Antonio José Gil, aged 22 and 20, are two friends and neighbors of Molina de Segura who warned the Civil Guard of the whereabouts of a pectoral cross at the end of the 18th century. Some researches that have allowed, in addition, to locate another jewel: a necklace with 264 diamonds and 49 aquamarines.

"We like antiquities a lot and we tend to be interested in the auctions and sales that are made online," Juan Manuel Rodríguez tells Verne by phone, "Also, as Murcia we had the issue of theft very present, because it was something that marked the city. It was something very ours, an attack against our patrimony and although we are young we were very conscious of what had happened ".

The first to run into the image of the cross of Belluga on the Internet was Antonio. He found it in a video posted on YouTube thanks to the story published on a Catalan auction website, Arts Valua. "It so happens that Antonio had recently acquired a catalog of the cathedral of the 60s on a trail," explains his friend, "the piece in question appeared on it, so it had its very recent image."

When realizing the coincidences with the original cross - "at the beginning we could not believe that it was there, in view of all" - they transferred the case to one of their professors at the University of Murcia, Manuel Pérez Sánchez, who guided them during two weeks in the identification and research work. "Once we were safe," recalls the student, "our professor sent an email to the Heritage delegation of the Civil Guard that is in charge of investigating this type of crime, but surprisingly it did not get an answer". The young people had to resort then to personal contacts that they had in the body: "a family member of Antonio who works in the Civil Guard delegation in Alicante was the one who listened to us and initiated the official procedures so that the order to investigate the whereabouts was given. from the cross".

In September 2015 the University and the two students ignored and left the case in the hands of the authorities. Until this February, when they began to hear rumors that the piece had been recovered and was about to arrive in Murcia to be presented publicly.

"Our professor began to denounce in social networks that we were not attributed the origin of the investigation. Francisco Nortes, from the blog Sentir Cofrade was, together with the journalist of La Verdad Antonio Botías, the first to refer to the location work we had done and that we informed the Civil Guard, "explains Juan Manuel. "Now the Ministry of Culture and the Bishopric has contacted us - in addition to other media - to thank us for what we did. We were not looking for an economic or other kind of reward, we have personal gratification, we just wanted the truth not to be lacking and that it be mentioned that those who really started the process were us and Manuel Pérez ".

According to the Civil Heritage group explained the Civil Guard in the act of returning the pieces to the Museum of the Cathedral, the identification of the cross was possible thanks to an exhaustive analysis that found in it soot particles, from the fire that the Cathedral of Murcia suffered in 1854.

Thanks to the collaboration of the auction house and to maintain an on-line catalog with products in history actively participating in the resolution and facilitating everything necessary for the location, the agents were reconstructing the trail of the collar and the pectoral cross, until finding their current owners who were finally confiscated. "We are very proud because these are very valuable pieces both economically and sentimentally," explains Juan Manuel.
It is not the first time that the Faculty of Art History of the University of Murcia helps in the identification of stolen articles. Last November, a silver lantern of the 18th century was recovered in an auction house in Madrid. The two young people also believe that the Fuensanta treasure case is not closed and more stolen specimens may appear soon.
Antonio, who is in the first year of History of Art and Juan Manuel, about to finish the fourth year, will continue with their studies and do not rule out heading towards research. "I would like this to be useful so that the voice of art historians could be heard," concludes Juan Manuel, "that society be aware of the important work of the experts in Heritage and that we have a little more in mind. Let us be equated with other much more respected professions. "