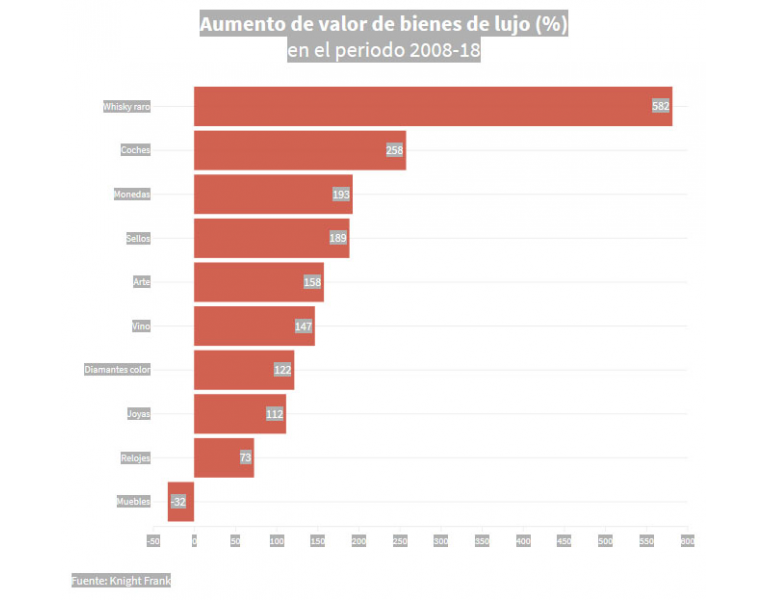 Rare whiskey is in vogue with investors around the world. And is not for less. The price of this luxury good has shot up 40% in 2018 and the increase in the last decade amounts to 582%, according to The Wealth Report 2019, by the consulting firm Knight Frank. Its revaluation is well above that registered by cars (+ 258%), coins (193%), stamps (189%) and art (158%), among other items desired by the upper classes.

But let's go in parts. What is rare whiskey? You may wonder. Old whiskey is rare, with a barrel maturation of 25 years or more; but also that matured in distillery barrels that are already closed, although even the rarity depends on the type of maturation and the barrels available. In short, it is the one for which there is more demand than supply, as explained by Durán Subastas to Crónica Global.
"Every investment has its risk"

David Durán clarifies that “every investment has its risk”, and adds that this distillate is more fashionable than wine, although “it depends on wine and whiskey”. In fact, the Knight Frank report lists 100 bottles of rare whiskeys and points out that 21 of them lost value in 2018. This alcoholic liquor “is the third most popular alternative investment in a period of stock market uncertainty, behind cars. collection and works of art ”, adds Scotch whiskey expert Charles MacLean.

On the other side of the scale are two best sellers from last year. In October, at an auction, a buyer from the Far East paid $ 1.1 million for a Macallan distilled in 1926 and bottled 60 years later. With designer label (there are only 12 like her). But in November, an investor paid 1.5 million for another Macallan distilled in 1926 and bottled in 1986 in a unique hand-painted bottle. Macallan distilled in 1926 and bottled in 1986 in a unique hand-painted bottle, sold for $ 1.5M / CHRISTIE'S
No tradition in Spain

David Durán explains that these sales "can make pieces appear that were not on the market." And so he tries to justify large outlays for a bottle of whiskey: a culture has been created around this distillate, there is a training and investors understand the production process. "They know how to appreciate it" and it is easier to preserve than wine, adds his brother, Alberto Durán. In addition, it is a masculine luxury: 95% of the jewelry market corresponds to feminine pieces.

Alberto Durán argues that "the good is increasingly scarce", since there is a polarization between "low cost and quality". This pushes investors to pay large sums for a luxury good like rare whiskey: "There are people who open bottles of 30,000, 40,000, 50,000 euros." Others wait for a better time to put them back on the market. In Spain there is no tradition - this medium has contacted two other firms that have not provided more information because they do not work with this product -; the bottles that arrive at auction houses do so as part of a set of different things.
The oriental market and whiskey

But who pays? "The biggest trend is the eastern market," the Durán brothers agree. In Asia "there is a very young consumer in terms of income availability". Data from the Scotch Whiskey Association reinforces this idea: Scotch whiskey exports to India, China and Singapore soared 44%, 35% and 24%, respectively, in the first six months of 2018. Here are ten of the rarest whiskeys sold at auction, a compilation from Catawiki:

Limited edition of Hibiki Aritayaki Ceramic, matured for 35 years, in a hand-painted Arita bottle: 9,370 euros. There are only 150 bottles.

54-year-old Bowmore from 1957, the oldest whiskey on the island of Islay (Scotland), in a handcrafted bottle that simulates the waves: 136,000 euros. Only 12 bottles were produced.

Macallan M in bottle made by 17 artisans for 50 hours. Four bottles were produced, but only two were available: 323,000