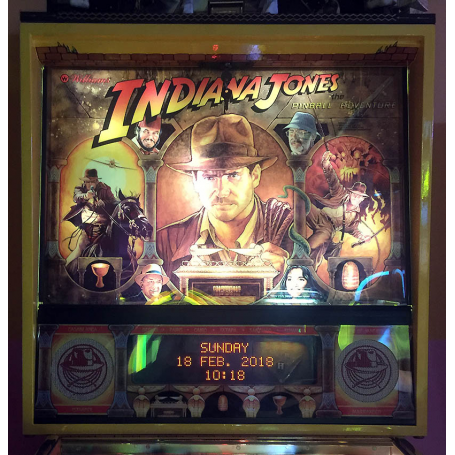 The Pinball Adventureiana Jones: The Pinball Adventure was designed by Mark Ritchie for Williams in 1993. This is one of the tables petacos most popular of all time, and it came out just at the right time. These games were still popular, the technology finally allowed you to have a sound and video of the movie, and is based on a recent highly acclaimed series. 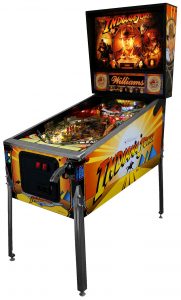 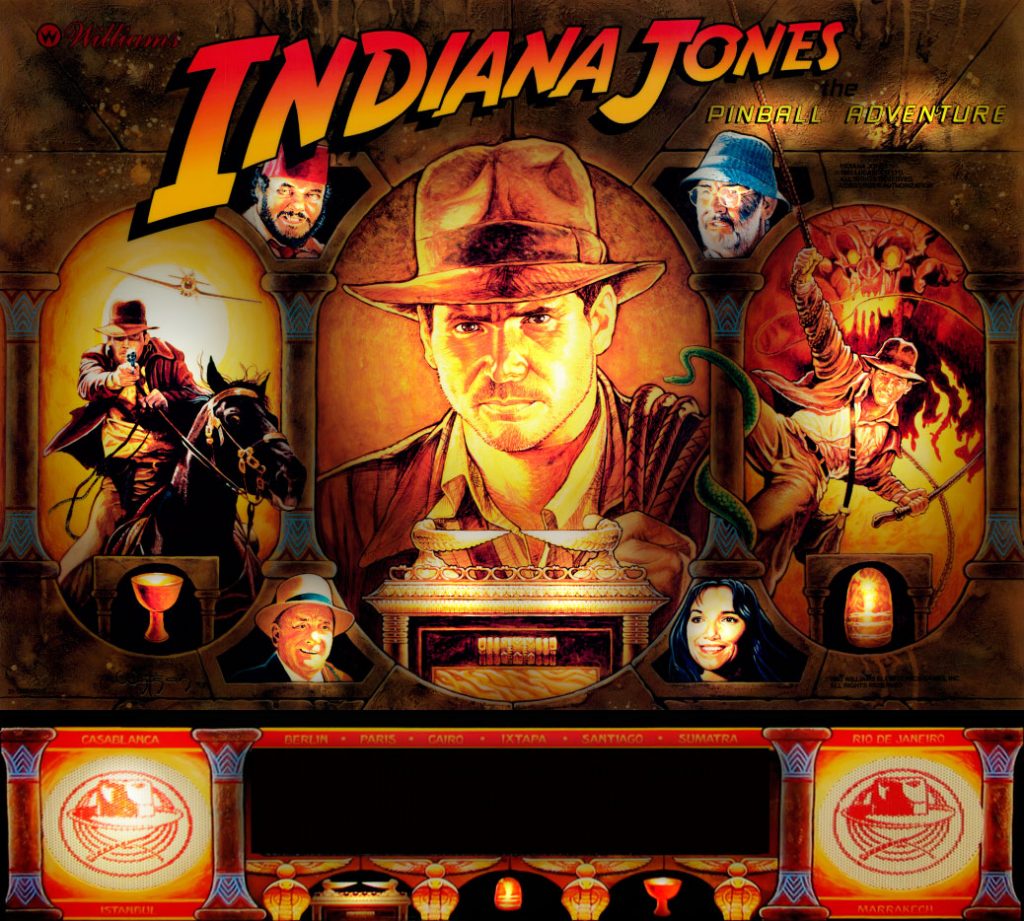 This pinball table is built around the technology SuperPin of Williams, who previously produced other games such as Twilight Zone (1993) or Addams Family (1992). It is characterized by its LCD screen, used now as ever to show scenes of the movies, and now by your new sound system DCS. Finally a pinball game with digital surround sound, which makes something as seemingly vain as a game of pinball us goal of full movies.

The sound is without a doubt one of the most salient features of the machine, as it includes voices digital film for each scene. In addition, the narration of the game is the responsibility of the own original actor of Sallah, John Rhys-Davies. We have also included some samples of Star Wars, as the sound that makes the Millennium Falcon when it doesn't start the engine superluz, to complement the sounds of ramps and targets. All washed down by the wonderful beats of the original soundtrack composed by the ineffable John Williams, the wizard behind the music of many films of George Lucas and Steven Spielberg. 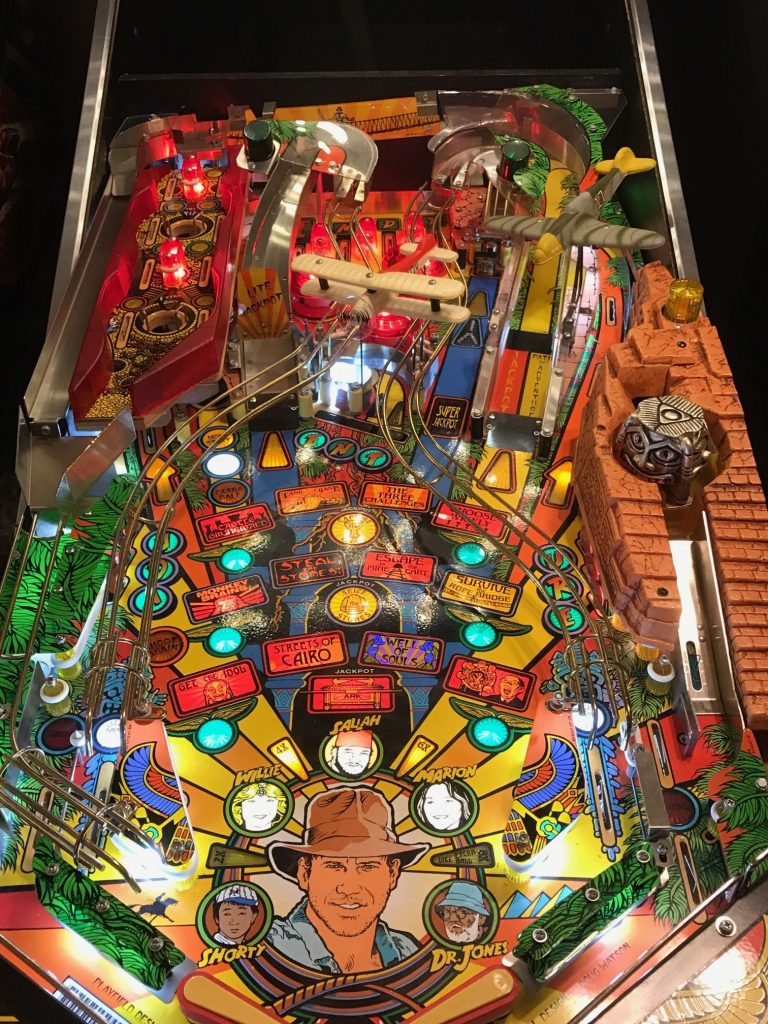 Oh, but the game itself is no slouch. It is a table particularly well designed, with ramps, trapdoors and holes everywhere. Like all similar machines, there are blind spots and slots for where the ball is lost irretrievably, but this batch of tables included a number of features to make your experience didn't turn out as bitch. First, at the start of each "ball" we have Eternal Life (as the Holy Grail), that will give us another chance if we strain too quickly. You can also activate the Narrow Escape, which will retrieve the ball in certain circumstances if it is strained through a rail outside. Of course it also can be forced with a little help...

Like other games of the system SuperPin, the machine offers game modes that are activated by straining the ball in the corresponding hole. It is not the first game that did this, but the one that probably best executed when these game modes scenes of the movies. In total we have a dozen of random events available from the original trilogy, some of them play directly on the video screen with the controls of the flippers. In these game modes we will have one task: to make loops, sieve it in some particular site, touching the target indicated, etc, All of course to increase up to the stratosphere our score. The scenes that we can (more or less) star in are the of the wagons, the persecution of horse tank nazi, The streets of Cairo and many other more, each one with the sounds of the movies. 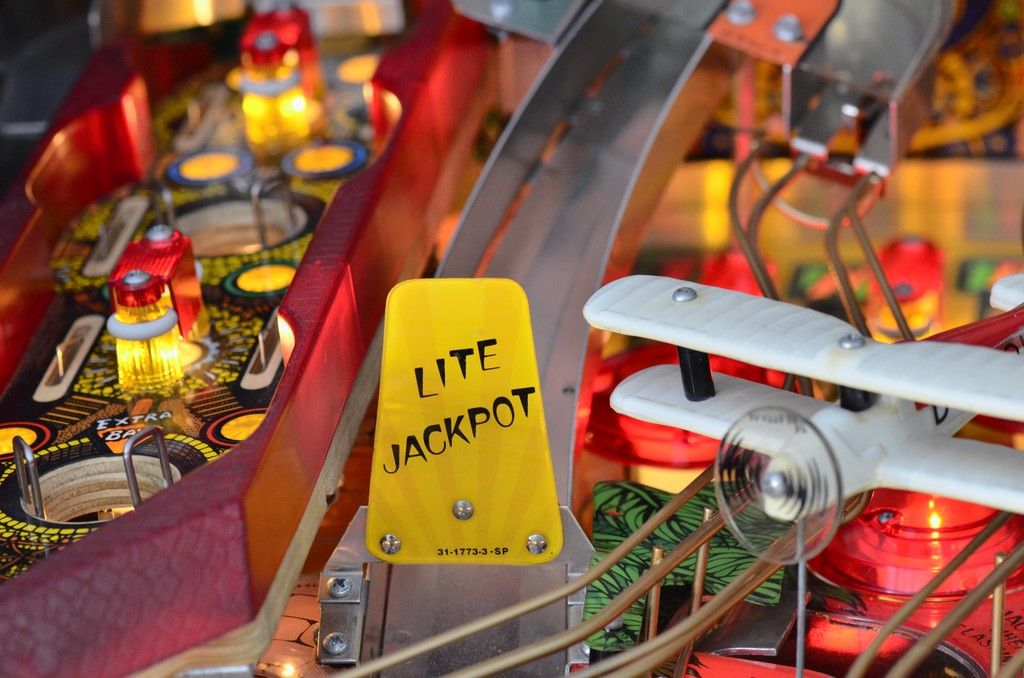 The screen of course can't offer a lot of realism, but that accompanies wonderfully well in the game with scenes drawn (or redrawn) from the movies. Special mention deserves the scene mode multibola, in which, as could not be otherwise, when professor Jones is pursued by a giant ball. That is something that will be well stocked this machine: three different modes. One is the classic in which we have to "locking" three balls to turn and we can win the famous jackpot, the other two balls which we will get by hitting a ball captive that is on the table, and the most spectacular of all: a mode of 6 balls simultaneous that corresponds with the game mode, the "pit of snakes". An insane, incredible of play. For the expert there is a fourth, also of six balls, which is active after playing all the available modes, in which you can win a whopping billion points. 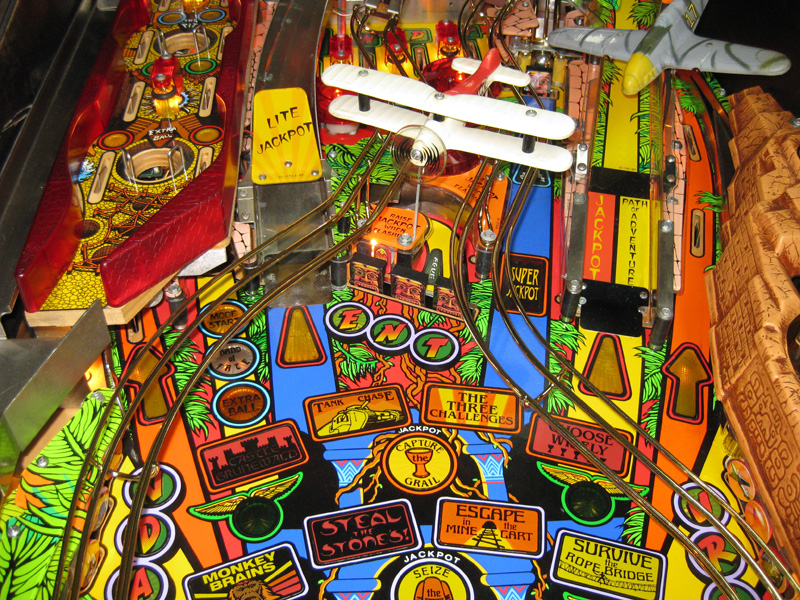 The game does not lack anything. Is a table really nice, with lots of decorations from the movies, and details are really good: one of the suppliers of ball is based on an idol, inca, and the spinning drop beads that have been blocked or strained in some place and that are still in the game. The "lever" to put balls in play is entirely electro-mechanical, and is not another thing that the revolver Indy. When you press the trigger "you would shoot" the ball into the playing area of the table, with sound and everything. Not surprisingly, its huge popularity. 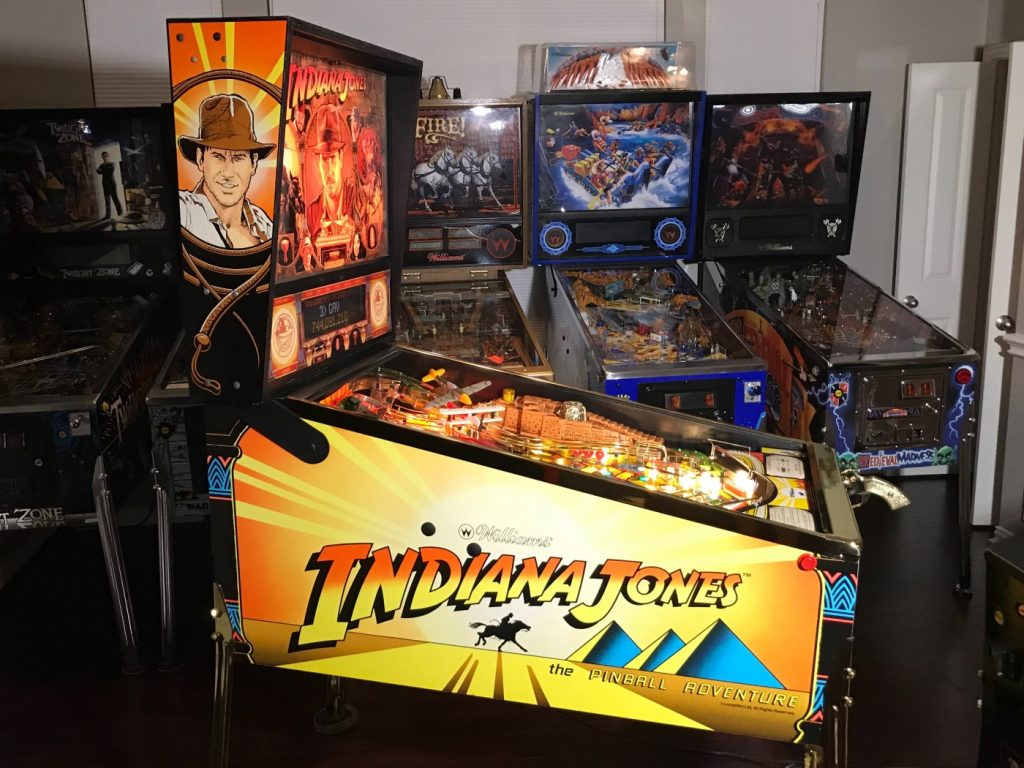 Already 25 years ago that I played this pinball. Unfortunately it seems that since the pinballs are not popular, and the bars no longer come with one. Now they are hard to find, and even more of Indiana Jones, as they of lots of electro-mechanical components and moving parts break more than a spare chinese. These parts, although they are not chinese, they are very difficult to find today, except the ROMs, which at least can be freely downloaded from the manufacturer. The scarcity and popularity of this machine has caused their prices to skyrocket: the most rotten are sold by more than 4000 euros, and some have been reported to overcome the 8000 mortadelos in the auctions. 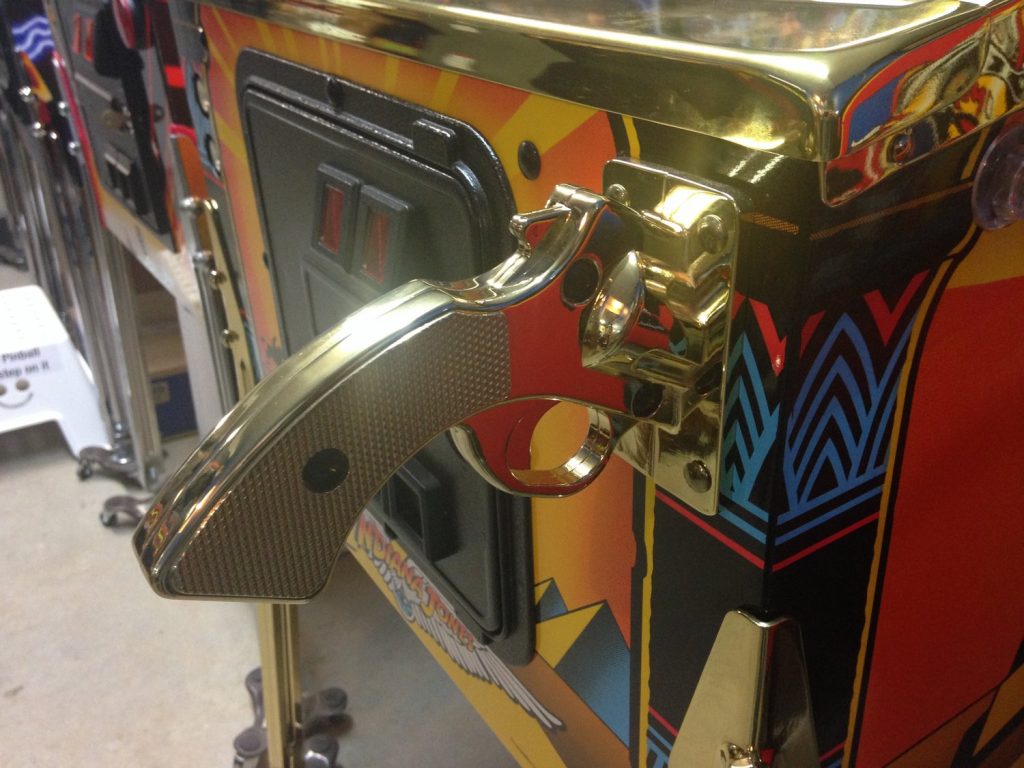 One way of remembering this game great is through a pinball simulator. It turns out that there are people who have taken the trouble to disassemble, scan and assemble in 3D the original designs, allowing us to simulate the experience on the PC. Being a digital machine, plus you can emulate the original hardware along with your ROM, so that we will have on-screen the scenes video and the sound as he could hear and see in your day. Isn't it wonderful? Maybe one day I dare to write about how to operate this machine. In the meantime, here is a little video that I've recorded. (ahorraos your comments about how bad I am)

In 2008 was built as a tribute I guess, another version of the table, completely redesigned, which also included elements of the fourth film, The Kingdom of the Crystal Skull, of that same year. More modern, with better sound, although interestingly it uses the same technology of the first and has exactly the same screen, to reproduce the experience of 15 years before. However focuses more on this last movie, so that in the opinion of this humble chulón is less attractive.

I hope to return to play this little machine before I go to the courtyard of the callaítos some day. Who knows? The same thing any collector that has a bar and dares to expose it, so danger of hands pringosas the defile... in the meantime, my thanks to my friends, fans of pinball, which I advise in this article:

Be happy, and remember these precious machines, if only to give the rod to your children of how we had fun with them.

We have a catering service and delivery ready for this kind of pieces, are very sensitive to the change of levels and movement; thus the existence of this service.

With the purchase of the machine enters the assembly at home, but the hours of the carrier's technical specialized that I rode on the site that you choose for your new position of your brand-new machine, there are included:

Any award or purchase outside of the peninsula custom quote.

The machines are tuned and work perfectly, is no guarantee of purchase. But when a product is so sensitive to sudden movements, we strongly recommend that your purchase to add this service, any claim not using this service shall be against the carrier chosen by you.

Artsvalua sl is not responsible, in any case, the treatment they give third parties your purchase.

Service restoration if it is of interest to you: Information Here.