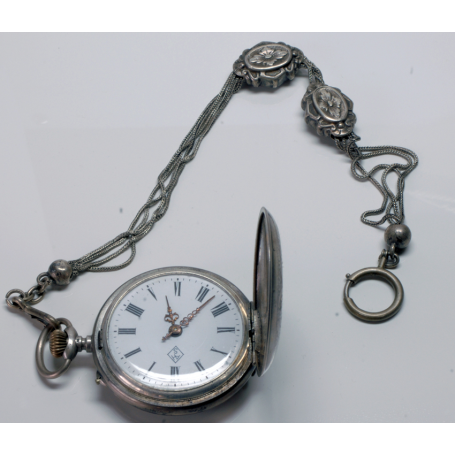 Presents this pocket watch a decoration in your box based on motifs of plants and pseudovegetales, made with much care, and in relief on the silver. The “châtelaine”, or chain female with hanging, it is attached to the watch with a small chain of elements, behind which is located a sphere. Then, fine chains intertwined lead up to two pieces decorated with flowers, after which to carry on those fine lines, topped by another sphere and a ring.

The sphere presents the numbering in roman numerals, with needles of kind Louis XV, a white background and white lines for a better reading of the minutes.

Some of the main characteristics of Modernism are his taste for the plant elements and curved lines, as well as a careful invoice of the parts. The interesting game which make all of the items decorated this piece makes a watch valuable for its materials, its lines and its history.

In the pocket watches of this date was normal for that to appear in the same the medals of the Exhibitions they had attended, these being international as the Universal Paris 1900, level or slightly lower. Engraved on the piece, showing the prestige of the manufacturer and of the same watch.

The words “Winding”, “Ancre” and “Qualite garantie” refer to the machinery. “Winding” refers to a system that led to a second “source of energy” to the clocks to improve their accuracy. The gravity was invented towards the end of the SIXTEENTH century, and the quay in the SEVENTEENTH century. However, many manufacturers of swiss watches and French added this word to its parts, from the 1860s to refer to that your works do not require the rope with a key.

“Ancre” (anchor) is a type of escapement (a device that converts the movement of rotation continuing in one oscillatory) invented towards the middle of the SEVENTEENTH century. “Qualite garantie” is translated as “guaranteed quality”, approximately, being a few terms are added by the watchmaker to promote your product.