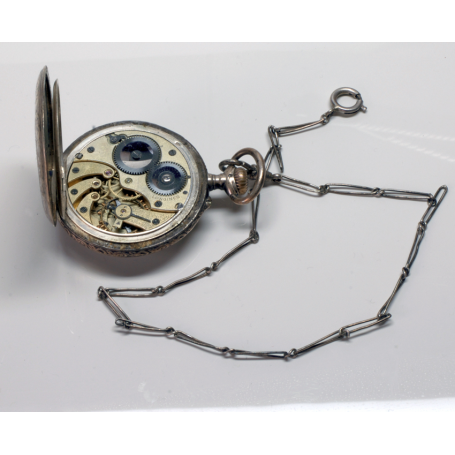 This pocket watch, Lepine, presents a chain of simple and elegant lines. The white dial displays numbering in Arabic numerals, the name of the signature needles and simple, in addition to a sphere to a smaller size (second hand).

Overleaf, presents the name of the firm and several circles that are the medals won by the firm in different Universal Expositions and International. In the legend to reference the Grand Prize is awarded to Longines in the Universal Exhibition of Paris of 1889.

The decoration on the back is composed of vegetable motives, which respond to the modernist aesthetics. The interest in nature is shown in the presence of numerous and varied elements which come from plants, stylized, and abound with the curved lines.

Auguste Agassiz began its relationship with a workshop for the production and distribution of watches swiss in 1832, and soon after was born the firm Agassiz & compagnie. In 1862 it passed to be called “Ancienne Maison Auguste Agassiz, Ernest Francillon, successeur” when you are in charge of it a nephew of the founder. Thanks to Ernest you change the method of work and production is centralized a bit more, and about a mill situated in Les Longines on the river Suze. The firm was a pioneer throughout its history in the mechanization of the manufacture of watches and clocks, the introduction of quartz movements, the reliability of their timers, the support to the pioneers of aviation, the interest and the importance of design, etc., With this effort, it has achieved a house known for its watches, in which the design and the quality of the materials are as important as the reliability.

11 other products in the same category