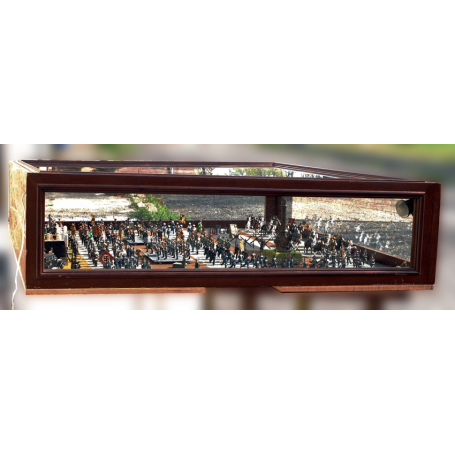 Showcase a flat-electrified mahogany wood and glass with the parade in full of the 50 year anniversary of the Third Reich, with approx 250 soldiers of lead-hand-painted. Measures showcase: 177x148x37 cm

Thumbnail of metal most known are the so-called soldiers of lead. The first figures seem to be made with tin, even it is said that you could do with precious metals, like gold or silver.

It is not known with certainty the origin of these unusual figures, could very well be that the military of the ancient times used to make simulations of future battles on a table as a hypothetical field of battle and were playing at battle of the desktop, which later moved to the field of battle. Therefore, it is also possible that these characters, would go after the children of these marshals, generals, to entertain by playing wars with these war toys. The origin of the soldiers as toy series takes place in the German city of Nuremberg to the mid-EIGHTEENTH century. These first soldiers were measuring 25 mm and weighing 0.250 g ,only had two dimensions. It was in France where it appeared the first soldiers three-dimensional ready-made in lead, which is cheaper than the tin alearon with antimony to make it more resistant. Finally, the English developed the toy soldiers hollow, which allowed to make them accessible to a wider audience.

Subsequently, the employment of soldiers as a children's toy decayed due to the high toxicity of lead and the paint that covered them. As a toy substitute, in the TWENTIETH century children have played with figures of "cowboys and indians" and other characters made of a kind of rubber which after some time were replaced by plastic.

At present, the figures of soldiers of lead, have gone on to be reproductions, handmade miniatures cast in molds with white metal, hand painted and with an extreme strictness of art, by going to documents of the time, and trying to respect the originals they represent very worthily, both with their clothes, footwear, weapons, flags, etc

The molds are created especially for each figure by skilled artisans in this connection, where it enters the molten metal and are subsequently ground and polished with precision tools, until they get to be perfect and suitable for a meticulous hand painting. At present, it is usually to use silicone moulds, though over time they have been used molds made of stone, bronze, clay, refractory, etc

Although colloquially it is still called lead, while the lead is in disuse due to its high power, polluting and toxic, so today is made with various alloys, in which each manufacturer will put their "personal touch", having ceased to be a toy to become regarded figures to collectors, even for display in museums.

The German nazi or national socialist was the period of the history of Germany between 1933, the year of the coming to power of the national Socialist German Worker of Adolf Hitler, and in 1945, the year of the defeat of the country in the Second World War, which resulted in the end of the regime.

Using the terminology nazi, are used also in the names Third Reich, greater German Reich or III German Empire in order to allude to this stage.

The term nazi is a short form of national socialism in German. This ideology was institutionalized in the national socialist German worker in German Nationalsozialistische Deutsche Arbeiterpartei (NSDAP), also known as the Nazi party.

The Third Reich is the period and is used as a synonym for nazi Germany. The term was introduced by nazi propaganda, which counted the Holy Roman Empire as the first Reich or empire, the German Empire of 1871 as the second and to his own regime as the third. This was done to suggest a glorious return of the Germany earlier after the Weimar Republic established in 1919 and which, however, was never dissolved officially by the new regime. Since 1939, however, the nazis themselves they avoided using the expression "the Third Reich" from 1943 they preferred to call it "Great German Reich" (Grossdeutsches Reich), with the object of alluding to the significant expansion of its borders took place in 1939 and 1940.1

The Nazi party attempted to combine traditional symbols of Germany with symbols of the Nazi party, being a unique symbol, the swastika, the most representative of the regime, in an effort to strengthen the idea of unity between their ideals and Germany.