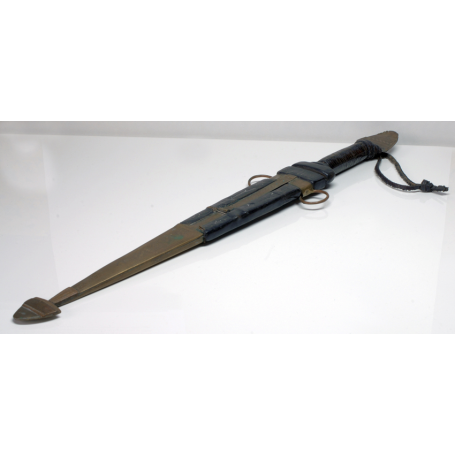 The metallic sheet, triangular in shape.

Presents an interesting decoration to base rooms increasing dots arranged in two rows and is hand-worked. The pouch combines the skin, of a dark color, with the brass, giving rise to a simple work but very neat.

The Tuareg are a berber tribe that, usually, they inhabit the area of the Sahara desert interior towards the northeast of Africa and to maintain a nomadic lifestyle based on herding. Their own traditions assert that expanded to the south from the Sahel with the legendary queen Tin Hinan, which is located in the century IV or V d. C., and to which is attributed the union of the tribes ' ancestral culture unique Tuareg that continues today. Their society is hierarchical, has a nobility and vassals. Each clan Tuareg is made up of several family groups, led by the amghar or chief; the grouping of several of these clans under an Amenokal form a confederation of clans “Kel”.

The nobility was responsible for the armed defense of the herds, looting, and occasional travel in caravans to trade. The adoption of Islam resulted in the emergence of a class distinct from “clergy”, that traditionally were not armed, and whose function was to serve as a spiritual guide for the nobles. At the bottom of the social pyramid are the slaves when they were held; and, on occasion, their descendants (called Beautiful), are still today slaves in all but name.

Attention is called to the important role of women in this culture, in comparison, at least, with their neighboring arabs, because to be a society is traditionally matriarchal. Also, the men wear a veil that covers the face: it is the well-known garment of blue color called Tagelmust (however, there is another type of blue veil is feminine and masculine and is called “alasho”). Among the traditional weapons of the Tuareg are the takoba (sword straight of around a metre in length), the tagheda (azagaya small), sheru (dagger, long), etc