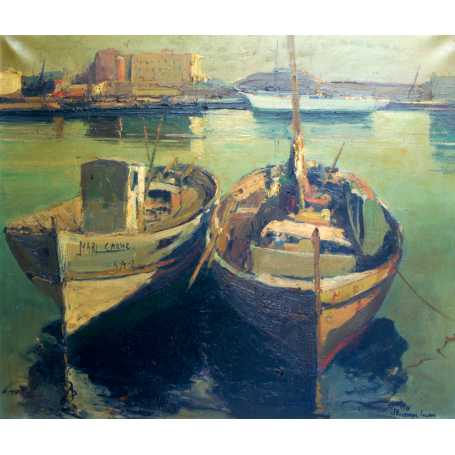 Josep Martinez Lozano was born in the Born district of Barcelona on the 29 of march in the year 1923.

During his childhood, does not feel any type of inclination to the plastic arts and painting. It is not until his youth that start to paint and forges his vocation permanently. Like so many artists of biography bohemia and haphazard, you must fight with the family opposition to their strong will to devote himself to painting in body and soul. He tells it thus: "Said unto my father: I Want to be a painter. He answered me: Well get out of my house. And so I did.". Since then, more will be the painting above any other thing in his life.

The first artistic studies carried out in the Escola d Arts i Crafts of el Clot, in Barcelona (1937). There he receives the early and most basic notions of drawing by the teacher sabadellense Domenech Soler. Later, became a disciple of Ramon Sanvicens and Joaquim Terruella.

Meets the military service in Figueres shortly after the end of the Second World War, when the country is going through a difficult post-war period.

He started in the world of painting since a very young age, when it is immediately attracted and curious by this aspect of the art. Formed in Palco, was a disciple of Ramon Sanvisens and Joaquin Terruella.

It was in Figueras, 1946, where he met the master Ramón Reig, who was the one who got him started in watercolor and entrusted him with the passion for this artistic discipline. He first exhibited in 1951 at the Sala Gaspar in Barcelona and, later, also made in Italy, France, England and Belgium. In 1975 he received the National Award of Watercolor. Later, in 1989, with the donation of a hundred watercolors, in large part, created in Llançà the Museum of the Watercolor.

Terrace, Montblanc and Llançà are three populations where Martinez Lozano will establish his studies and will have a great importance in his personal and artistic.

Throughout his career, he was awarded with many awards and honours, notably his appointment as a member of the Royal Catalan Academy of Fine Arts of Sant Jordi (2004), or as honorary chair of the Agupació 'Watercolorists of Catalonia.

In January 2006, the city Council of Terrassa named him an adoptive son of the city in a ceremony that, without knowing it, it would be the last event he would attend. On 7 June 2006 died of an illness at his home in Llançà, accompanied by the family.