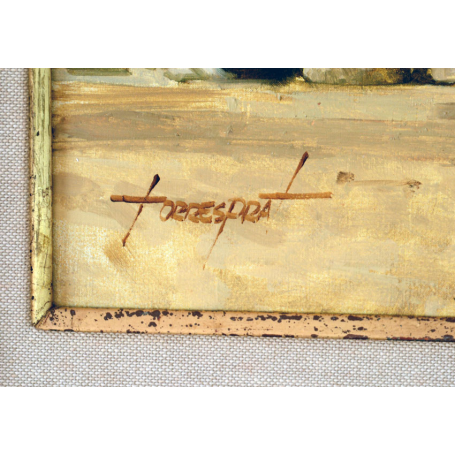 Enric Torres-Prat, also known as Enrique Torres or Enrich (not to be confused with Enric de Manuel González "Enrich") is an illustrator and painter Spanish figurative.

He was born in Barcelona in 1940. Had a vocation for painting since childhood, taking an interest both in painting as in photography, but opted for the latter when he found that he was a much better t for your ideas. He studied at the Academy of Sant Jordi, and in his youth he toured several european countries and the united States, studying the way the paint from the various museums that are found. Of these the one that most influenced him was the Rijkmuseum of Amsterdam, especially Rembrandt.1

He began gradually to work in the agency Selections Illustrated with little more than 20 years. He tried to seek the way of independence of Selections to what that is joined to Rafael López Espí and together they worked by drawing album covers for various publications of suspense and superheroes of the Publisher Vertex.2 Formed part of the project Altamira, the Group Experimental d Illustradors.3 Between the late sixties and early seventies drew numerous covers for the magazine a New Dimension and Dracula of Buru Lan.

Subsequently, the own Towers along with other cartoonists comic book fans american suggested to Josep Toutain, director of Selections Illustrated the possibility to try their luck in this market,4 an event that occurred around 1970. After some contacts were obtained various commissions for this market, much better paid than the european,5 taking Enric for the first job, in 1971, the cover of the collection of science fiction stories , People, and Machines , Jack Williamson, ACE Books, which was voted best cover of the year of science fiction. In the following years, became one of the portadistas top of the magazine Vampirella, for which he drew on 52 occasions, in addition to other covers for Eerie and Creepy, all journals of the publisher, Warren Publishing. This editorial was granted the award for the best cartoonist in 1974.6 Selections Illustrated, for his part, he was awarded in 1981 and 1987.78

After this time he devoted himself entirely to his facet as a painter of figurative. Since then he has exhibited his work in numerous art galleries of Europe and the united States.

In his time as an illustrator was recognized as one of the best cartoonists of covers Spanish of his time. The also cover-maker Manuel Sanjulián, with whom he coincided in his time, in Selections Illustrated, he mentioned, when in an interview she was asked about the best illustrator of Spain.9

After to devote himself entirely to painting abandoned the fantasy themes that made him famous and opted for a thematic figurative symbolist.

The technique generally used in your artwork and paintings is oil paint on board or on canvas, but also uses pencil on paper for drawings in black-and-white. Used to use a base photo for your artwork with images of models, usually non-professional, and occasionally of himself, pudiéndosele recognize in some illustrations.10

Employs the signature Enric for his illustration work, and Torres-Prat, although until the early 70's I used to sign as Enrich.

Galleries that have exhibited his work

Galleries in the united States