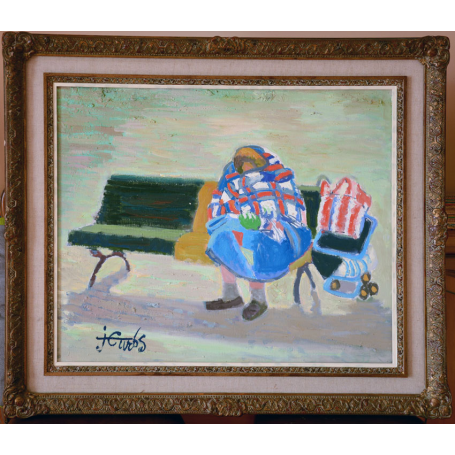 Formed in the School of Arts and Crafts in Olot , a center of great artistic tradition. His first exposure individual held in the galleries and Garden of Barcelona , in 1950 . In 1951, he began his participation in the Salons of October in Barcelona . Among the Catalan artists that emerged from this important demonstration highlighted Curós, from the beginning, by their powers of painting and your personality. Between 1958 and 1963, his painting goes through a stage of abstract tendency, with arabesques and colourful, and paintings with qualities of enamel. Later assume a figurative style characterized by the importance of the light and by the interest by the instantaneous pickup. He belonged to the group of the sala Parés, where he exhibited several times between 1965 and 1989.

His work is perfectly recognized, from the first stage, figurative, contemporary to the above mentioned Rooms, the masses of colors clearly demarcated by a marked drawing, until the present form, back to the representation, of color more nuanced, going by his stage informalist , in that their basal paint, forming a sort of ovals, is recognized by its concept personal. In his time informalist is attracted to, by the possibilities the material, creating works of great format, the use of enamels of bright, "become his painting in a continuous exaltation of the factor textural-color" according to Lourdes Cirlot. Carlos Areán, says that his painting "has evolved from a figurati - vismo traditional spacious flat,marked volumes and solid structuring, to a, technically, studied the use of various new materials,with the consequent suppression of all pretext of objective".

The influence of abstract Expressionism gives way to images taken from the natural environments of sailors and markets filled with flowers, and fruits. The colors are piled in successive layers that overlap, even on the plaster to contribute to the canvas textures of a great dare. Shapes and colors are almost Fauvist coexist in him with snippets abstract that allow you to enjoy a different view and absolutely personal life.

In 1952 is selected by Eugenio dOrs to be in the X Room of the Eleven, and in 1953 participated in the II Bienal Hispanoamericana de La Habana appeared in major group exhibitions including the III Bienal Hispanoamericana, Space and Color in the Spanish Painting of today ( Rio de Janeiro,1959 and Montevideo,1960). Paint current Catalan (Lisbon and Porto,1960), or Figure, homenaje informal a Diego Velázquez (1960);Contrasts in the Spanish painting today (Brussels, 1961); 3rd Granollers Painting Prize, Tapestries of High fabrics, Tapestries by Contemporary Artists (Galleries Biosca ,1961),Salon de mai, Salon des Independants .

Great painter, inspired by the Costa Brava, whose splendour is reflected in all his work. He has exhibited in the best rooms and galleries in his country. His work is also exposed in several museums all over Spain.

"The color, which has always been very present in the work of Curós, express now the joy of the moment that lives,once taken over by the intelligence of the complexity of the perturbing of the passions." Josep Mary Chain.

The work of Jordi Curós has earned numerous international recognitions and galleries as legendary as The Swan of Madrid have had him in their roster of artists. Also the Museum of Art-contemporary of Barcelona and the Royal Artistic Circle of the capital of catalonia, where the price of his paintings grows steadily as the years pass.

Exhibition of Jordi Curós In The Eurostars Grand Marina

From 30 November 2007 to 30 January 2008, in the framework of the hotel Grand Marina, Jordi Curós is exhibiting his works, with a great acceptance.

Jordi Curós shows, at The Eurostars Grand Marina Hotel *****GL, the latest evolution of his artistic career,which began in the School of Arts and Crafts in Olot on your land home, from where it travels to Paris. In the city of light,the painter of girona creates works with a strong character schematic, in which the line gets a prominent role. Little by little,Curós changes, arriving at the beginning of the sixties to investígar the employment of different materials and textures in compositions of his works to come back later - mind,to a figuration with the color as the great protagonist. All in all, the artistic trajectory of Jordi Curós has varied a lot throughout his career, currently arriving at some creations that combine figuration and patchwork abstract, with which to enjoy a different vision, full of color and textures.

Library i cartoteca of the ECC SELECT.ART - CURRENT JORDI EVENTS