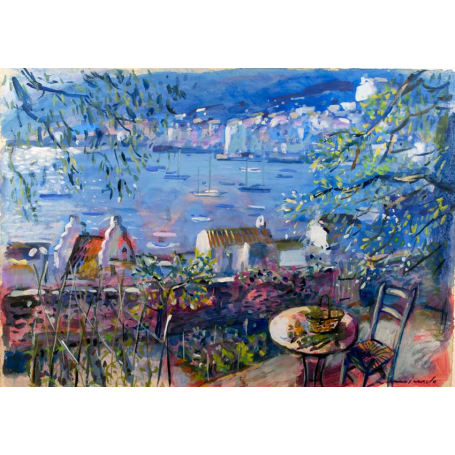 Ramon Moscardó studied in his native Barcelona, at the Escuela Superior de Bellas Artes Sant Jordi and at the fish Market. In 1971 he received the premio Santiago Barceló in the contest of younger painters, organised by the sala Parés, a contest in which you will get the first prize in 1975. Moscardó has been awarded, in addition, in the Contests of Young Painting of “El correo Catalan”, where he obtained the First Prize in both 1972 and 1973, the Special Prize Ybarra in 1972 and Third Prize in 1975.

Works in addition to engraving and illustration, and has held solo exhibitions of his work both in Spain and abroad, as witnessed by the exhibitions held in the D. J. Lester Fine Arts, Los Angeles (1984) and the Kwai Fine Arts of Hong Kong (1996). In addition, he has participated in group exhibitions such as The “new impressionists” (The Brentwood Portfolio, Los Angeles, 1978), in the I. G. I. of Chicago (1990), Art Asia in Hong Kong (1994), Claire Oliver Fine Art Stuart in Florida (1994), Davis Messum Fine Art, London (1997-98) and several organised by the sala Parés, where he exhibited regularly individually since 1978.

The artist himself describes as a “painter of towns and of people”. In their urban landscapes, interiors, and diverse environments, expands the most of your intuitive abilities and your keen sense of capturing the environment.

His paintings depict mostly scenes of everyday life: the bars and terraces filled with people, corners of the Gothic quarter of Barcelona, streets with passers-by, and beaches at night. His painting, based on a language agile strokes and spots of colour, offers us visions of renovated reality.