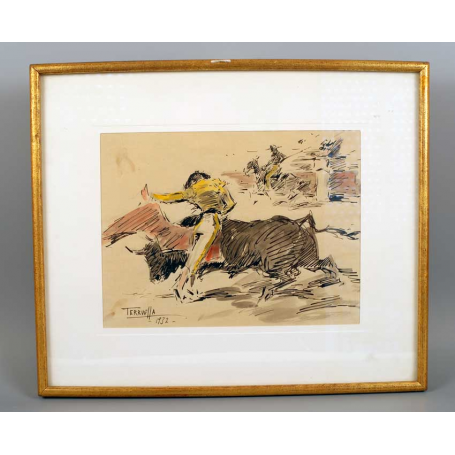 Nephew and follower of Second Matilla, Joaquin Terruella was also a disciple of Santiago Rusiñol. With this last he made a trip to Italy, also spending a season working together in Aranjuez. He exhibited individually for the first time in the Goya hall of Barcelona, in 1916. Since then, it took place their samples in the city of barcelona, especially in the sala Parés, and in Paris (exposes for the first time there in 1922), Zaragoza, Bordeaux and Biarritz. He is especially noted for the theme of bulls, and in fact worked as an illustrator taurine for publications “in The Day” Chart and “The Night”. In addition to tried scenes of gypsies and cafes concert, and was a prominent landscape within the line style.

Is preserved of his work in the Museum of Modern Art Barcelona, Museum of Contemporary Art of Madrid and in the Museo Provincial de Lugo.
In this work, Terruella plasma with its usual synthetic language, which is of enormous expressiveness, a pass of bullfighting. The author summarizes the entire motion in a single frozen moment, capturing the scene with a huge instantaneity. The composition is of a great sobriety, limited to the essential elements in favor of the marked dynamism that dominates the image. The bullfighter and the bull appear in the foreground, occupying all of the space and casting expressive shadows on a floor vacuum, determined by your own background color. There is No more spatial references that the chopper that is seen in the background, blurred by the distance and reflected, as the bullfighter, in full motion.