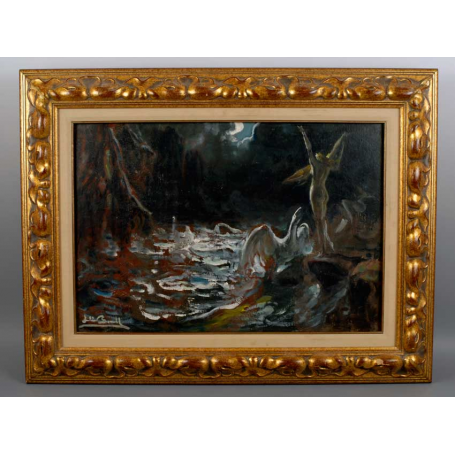 Son and disciple of Pere Borrell's Case, it was formed in the School of Fine Arts of Sant Jordi in Barcelona. In 1888, at the age of eleven years, he participated with a cloth in the contest barcelona for the Universal Exhibition. Since 1894 he took part in almost all the exhibitions officers held in Barcelona and Madrid, and was awarded honorable mention in 1897. That same year he obtained a second medal at the exposition of Arcachon, France. His extensive production includes works in both oil and pastel, and covers a wide range of topics. The topic that most cultivated was that of the classic maja Spanish, women mantilla and comb, set with your personal style, sensory, extraordinary skill and mastery of drawing. Among its many paintings, some of which have been quite played, it should be mentioned “The viaticum to the high school”, “Lavapiés in Holy Thursday”, “real Weddings”, which he painted by order of king Alfonso XIII, “honey Moon”, “The triumph of christianity,” etc., Is also dedicated to the decorative painting, making murals of religious theme to the church of San Francisco of Buenos Aires and the dome of the basilica of la Merced in Barcelona, destroyed in 1936. Throughout his career, Borrell held many individual exhibitions in several halls of barcelona, and participated in group exhibitions and competitions. Many of his works are exhibited at the Museum of Modern Art of Barcelona.