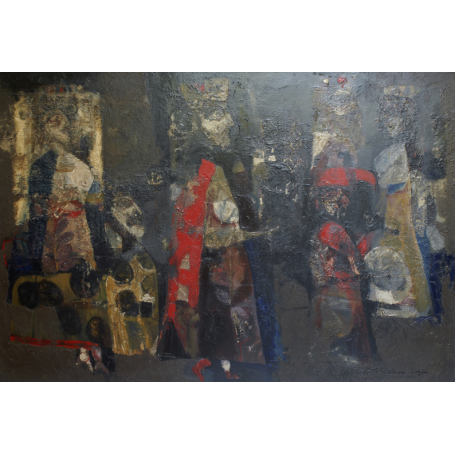 Roc Riera Rojas (Barcelona, 1913-Castelldefels, 1992) was one of the creators of Catalan more versatile of the past century. His vast production includes from calendars advertising to large canvases, boxes of disparate threads that had in its time a good reception from the critics. Despite his brilliant career, Riera Rojas has not enjoyed a wide public recognition. The publication of the book Roc Riera Rojas (Les Publicacions de l ' Abadia de Montserrat), which collects a large part of the production of the illustrator since 1935, wants to put an end to this unjust oblivion.

The family of Roc Riera Rojas has been actively involved in the collection and sorting of the material, which is concentrated in his workshop and house in Castelldefels. His daughter, Anna Riera, took the initiative to publicize their work after the latter's death in 1992. The task was not easy due to lack of cooperation of some of the companies with which it had collaborated Riera Rojas and by the difficulty of access to certain files.

The designers Claret Serrahima and Enric Satué, among others, have been commissioned to comment upon the quality and the contributions to art of the illustrator. Satué, for example, highlights in his article the chromatic richness used by Riera Rojas in their jobs. The authors of the book put also emphasis on the difficult social conditions in which he had to create his works. The franco censorship exercised a tough control on all types of publications, for more puerile they were. This extreme surveillance forced the artist to make several versions of his illustrations for the covers of the collection is Oasis, of Editions Ditch. The censors did not see with good eyes the Russian nationality of some of the authors of the catalogue of this publishing, be it Gogol or Dostoevsky, remember Satué. The books were the great refuge professional Riera Rojas. Many readers still remember their works to illustrate the cover of the flagship titles of the Editorial Noguer, such as In cold blood, Truman Capote or The death happy, of Albert Camus.

The cartoonist was, in addition, one of the artists who worked to dignify the quality of the illustrations of children's books. The illustrations which accompanied the edition of The tales of Andersen (Editorial Fund Credsa) are a good example of his dedication. Iconic characters of children's literature as the Snow Queen or the little Mermaid appear in their originals, without concessions to the cheesiness. His drawings for the classic The great wave, the Nobel prize winner Pearl S. Buck fund (publishing Planet), The don Quixote of the Mancha (editorial fund Credsa) or The magic flute (Fund Carl Euberreuter) are among his masterpieces and show his mastery of the craft.

In the creations of Riera Rojas is perceived a taste for the exotic, wisely exploited. Orders as those of the Editorial Mill to illustrate the covers of the adventures of Salgari allowed him to give free rein to your imagination. The illustrator was also a regular in the pages of children's magazines like Mickey, which he occupied of adventures featuring cowboys and apaches.

Any support served Riera Rojas to express his personal talent. Designs for covers of albums, restaurant menus, calendars or advertisements allowed at the beginning of your career to perfect your style. Those first collaborations with the world of advertising highlights the correspondence between the illustration and the message, as you write in the book, Claret Serrahima. The announcement for the pudding of the brand Yastà is well representative of the first stage of the artist which also include ads for Pirelli or the Ossa motorcycle. With the time, very much influenced by cinematographic aesthetic, would approach other land expressive less kind, as in his series of covers for the collection of novels black of the Editorial Noguer in the 1970s. The book also includes her work in painting and his forays in the scenery and costumes for the play the labyrinth, and the Centaury, the dancer José de Udaeta.