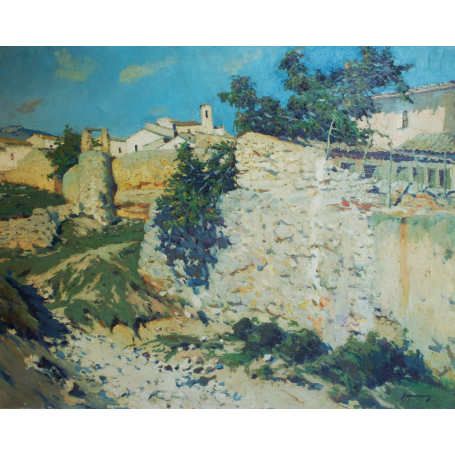 In 1944 he held his first individual exhibition at the Spanish Galleries of Barcelona, and in 1945 he lived in Paris, where he studied the works of Van Gogh, Cézanne, Gauguin, and Bonnard. In 1946 he obtained the pension by The Paular and lived in the Netherlands, where he studied Rembrandt, Vermeer and Franz Hals. In 1957 he was appointed a teaching assistant of Painting in the Superior School of Fine Arts of Sant Jordi; in 1965 he won by opposition the square of Assistant Professor Tenured at the same institution and, in 1971, was appointed its Secretary. In 1975 he ceased from all his positions in the acute disease to the left eye and on occur the first symptoms of a chronic respiratory insufficiency. In 1986, it held the last exhibition in the painter's life, organized by the Fundación la Caixa of Barcelona, shows that he moved then to Madrid. The morning of the 1st day of march, 1987, he died in the Clínica Sant Josep in Barcelona. During the following month was dedicated to a tribute to the Cercle Artístic de Sant Lluc.