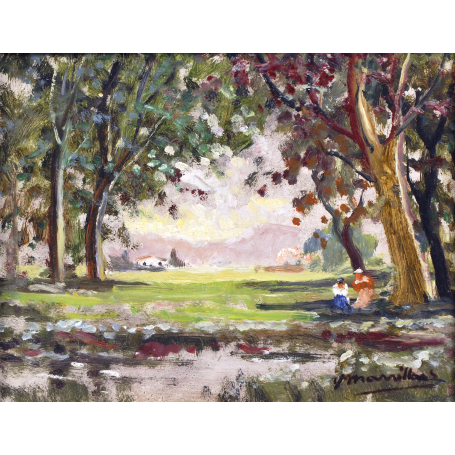 Joaquim was formed in the School of Fine Arts of Olot and as a disciple of Enrique Galwey, Ignasi Mallol and Xavier Nogués. Exhibited for the first time in Barcelona, in 1935, a time from which his work could be seen in this city, in Olot, girona, Madrid, etc, Follows the landscape school of Olot, modern and realistic, which brings a touch of the impressionist staff.

To be seen in this work his personal touch impressionist: brushstroke, capturing the influence of light on the objects, colorful, etc, in Addition, also note a certain realism. The result is a work that suggests life, for that stroke live, the color used, and the presence of two figures on the bank of the river and on the bridge. The interest in nature is also a feature that contributes to the Impressionism.