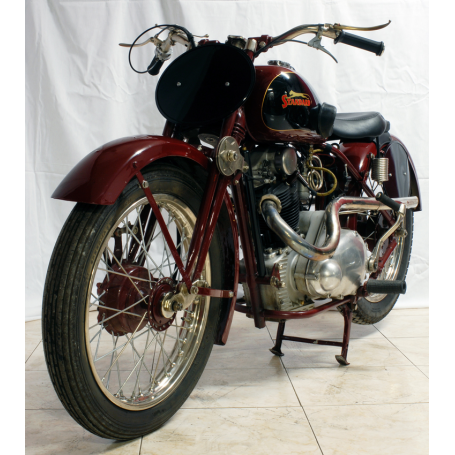 See translation and video below:

In perfect state of functioning. Restored.

This company was founded in Swabia by a Herr Wilhelm Gutbrod in 1926. Inspired by the machines English of the time, that is to say, heavy machines in their majority of a large displacement 4-strokes, which were indeed very impressive and at the same time very influential. Apart from many other manufacturers, however, have chosen a motor swiss the MAG. MAG producing numerous and different 4 stroke engines with capacities ranging from 350cc. up to 1000cc. So that they could be competitive as the excellent JAP british or Sturmey-Archer engines. The single cylinder engines were equipped with a dual exhaust system (breath-enhanced) a feature that STANDARD used despite the increase in the price of the finished product as compared to that of some of its competitors.
During the 1920s and early 1930s the machines STANDARD had great success in sporting events, participating in almost every event held in the south of Germany and Switzerland, where a subsidiary also produced its line of bikes for the domestic market. Especially spectacular were successes in the class of 1000cc. with sidecar. The great German ace of Formula 1 of the 1930 Hermann Lang was famous as the pilot of a STANDARD sidecar racer.
Herr Gutbrod always reinventandose! Even there were several three-wheeled vehicles of delivery, trying to get a piece of the market so far controlled by Goliath, Framo, Tempo and Phänomen. It says supposedly that these machines are STANDARD constructed from 1935 until the end of the war in 1945, the reason for using the adjective 'allegedly' is that the information that we have of these machines has been impossible, therefore, these allegations are not based on verifiable facts; also , in 1939 the German government restricts the construction of three-wheeled Goliath and Tempo only. It is also stated that the standard built industrial supply van-type of vehicle from 1946 until 1949, the detailed information about these data is not available suggests that the numbers produced were very small. None of these vehicles appear to have ever been sold in the German market, suggesting that they were built by the French occupation forces.
The most popular model they produced was the BS-500 single cylinder 500-cc machine which visually was almost as impressive as the magnificent Opel 500, with a wild paint scheme totally unconventional, a red frame with wheels yellow, although the client is more conservative, you could also get your STANDARD black. The framework is made up of individual tubes that are joined together at strategic points, leaving the set in an attractive form, although perhaps a little too complex.
It was after the economic reform had taken hold in 1934, when the German industry became to build unhindered by foreign occupation and the looting institutionalized who introduced his design of the engine itself. The flagship model of this engine line-up was a cylinder of 500cc. only 4 times, with a camshaft, a first in the industry. In addition, the machine comes with a transmission 4-speed when 3-speeds were, by far, the most common and features an integrated oil tank in the front of the motor housing. This place was chosen to improve the cooling of the oil, a very important consideration at the time because the oils available back then were everything else, but the pound sterling, its chemical composition was such that many types of oils are disintegrated losing their qualities lubricants within a short period of time due to the intense heat, the development of which it is an integral part of the internal combustion engine. Despite these features of modern engineering, the transmission was a separate entity attached to the engine block as had been de rigueur in the industry in the decade of 1920, see the essay on the 'fabulous' Fable of an explanation.
During those years, Herr Gutbrod also designed and marketed 2 small cars, one with the 400cc. and the `big one 'with 500cc. two times that are two designs. Body-wise otherwise the cars were identical to the DKW / Framo (body made out of plywood, vinyl covered), but they are technically different, being the engines rear-mounted, actually in front of the rear axle, the mid-engine. The sales are not justified, however the production and the model became the industrial model in the shape of which sold well despite the very tough competition represented by Goliath, Tempo and Framo.

The jewel in the crown, the last STANDARD ever produced, the cylinder of 500 cc, single overhead camshaft, 4-stroke 'Rex' and 'Kurier'. These machines not only detacaron in performance and reliability, but that were also visually impressive, as well, `Male 'bikes have never been a feature of German bikes German more often than not is one of the smaller varieties and the machines to 2 times that were characterized by a rare degree of civilization and many times elegance), but this was in fact a male in a big way, while a woman might be represented riding a DKW or any number of bikes German, his gait Rex Standard was simply impossible to imagine. Provided a framework fully modern with rear-wheel drive suspension telescopic when such a luxury was a rarity in reality, not even the visionary Norbert Riedel, with its incredible 350-cc V-2 for Ardie had thought of it, in spite of machines STANDARD to truly have been excellent at all levels, despite sporting successes at the national level the boys `great 'as DKW, Triumph-Nürnberg, Victoria, BMW or NSU sold. It does appear Herr Gutbrod never imagined to be a competitor with the guys `large 'in a volume level. That was a competitor at any other level is pretty obvious. What the factory did during the war years has not been reported predictable, which means that they were engaged in the work of defence.

After WW-2 several broken attempts to resuscitate this brand is made, all was in vain, not even his sister swiss factory was closed. Why this last was done also, it was predictable been reported. Herr Gutbrod was a man very sick at this time and that perhaps the explanation for the failure to re-start the production of motorcycles, their children however they began to build great small cars and delivery vans (Atlas) under the name of Gutbrod.

1 other product in the same category