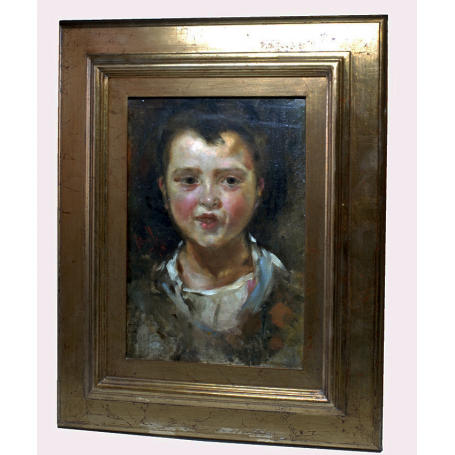 Signed in the middle left.

Joan Brull trained at the School of Fine Arts of Sant Jordi in Barcelona, where he excelled as an excellent student. Influenced by the realism of his teacher Simón Gomez Polo, began his career by dedicating himself to painting genre scenes and historical as “The tonsure of king Wamba”, exhibited at the sala Parés in Barcelona in 1883.

During these years, related also with the modernist movement and the aesthetics of symbolist influences that marked much of their production. He went afterwards to Paris, where he completed his training from the hand of Rapahel Cöllin for five years. His style was evolving in a sense, each time more personal, leaving behind the realism in favor of idealism “fin de siècle”. However, continued interest in the painting of history, the customs scenes and portraits, reaching in the latter, a great mastery. On his return to Spain, he participated in numerous collective exhibitions in Madrid and Barcelona, as well as abroad, in London and Paris. He went also to the National of Fine Arts of Madrid, where he obtained award in 1892, 1895, 1897 and 1899. In the meetings held in Barcelona was also distinguished in the editions of 1894, 1896, 1898, 1907 and 1911. He obtained the third medal at the Paris Exposition of 1900, and was appointed Commander of the Order of Alfonso XII in 1904. Also participated as an art critic in the magazine “Youth”.

Outside the rigour of academic, Brull Vinyoles soon abandoned the idealism of painting, to which he consecrated all his work. A man of great culture, actively participated in the gatherings of Els Quatre Gats. His technique of contours blurred, grisailles and shades of pearl, as well as your theme populated with ethereal female figures, allow you to situate your work within the symbolism romantic. After her untimely death, the sala Parés of Barcelona dedicated an exhibition tribute to (1913). Brull is represented in the Prado Museum, the National Art of Catalonia, The Garrotxa, in Gerona, and in the Art Nouveau and Art Deco Casa Lis in Salamanca.

In this canvas, Brull trace a portrait that is intimate and enigmatic, dominated by clear shades that blend into the background, fusing the figure with the atmosphere. The girl doesn't look at us directly, but it shows concentrated, abstracted, while marking a clear distance with the painter and the viewer. This type of representation female melancholic, deeply introspective, are characteristic of the last years of the NINETEENTH century, embodying what was called the “mal du siècle