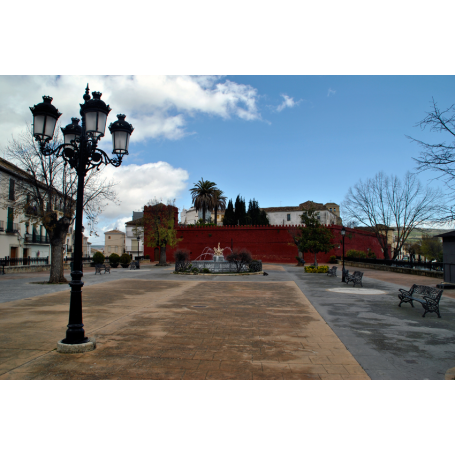 Castle, of arab origin and rebuilt in the early TWENTIETH century; Its walls were destroyed, in the SIXTEENTH and SEVENTEENTH centuries. Remodeled from the beginning of the century, and with great presence in the heart of the city. Between the buildings defensive of your environment, there are still watchtowers, such as the Torresolana.

See the 2 videos below:

This is one of the lots surplus auction to not be covered the minimum price for outlet, signed the contract as owner. Any additional information by calling customer care.

Alhama de Granada is a Spanish municipality belonging to the province of Granada, in Andalusia. Is located in the western part of the region of Alhama, to the foot of the Natural Park Sierras de Tejeda, Almijara and Alhama, which provides summers with mild temperatures.

Alhama de Granada is well known for its thermal baths arab (who comes in his own name, al-Hama, which means "the bathroom") and that would lead to the current Spa, and for its stunning Gorges, located in the high part of the town and classified as Landscapes of Outstanding according to the Special Plan of the Physical Environment of Granada.

The main economic activity is agriculture, with exploitation of cereals and olive trees. The livestock activities are concentrated in the cattle sheep and goats. The tourism started to gain importance with 403 hotel rooms and 104 in hostels and pensions (2007 data). Immigration is slightly higher than the 10% of the population, proceeding more than half of the immigrants from Morocco.

The Spa of Alhama de Granada, built over an old basement roman of century I d.C. it is an important source of income for the population thanks to the tourism of health and relaxation that is sure to attract their hydrotherapy treatments.

Alhama preserved historical monuments as significant as the arab baths that give the city its name, located in the town in the direction of Granada and the roman bridge over the river Alhama, close to the thermal baths.

The monumental part of the town is concentrated in its southwest zone. All the old town is declared a Historic-Artistic site. Among the most important elements is the Church of the Incarnation, erected by order of the Catholic Monarchs in 1505 on the first christian church consecrated in the ancient kingdom of Granada, after its capture by the christians. Its cover is the work of Enrique Egas. It also has a castle, of arab origin and rebuilt in the early TWENTIETH century; the church of the Carmen, XVI century renaissance building with baroque decoration; the House of the Inquisition, in the isabelline gothic style, which retains only the original façade; the Hospital of the Queen, the renaissance; and the source known as Caño Wamba, built in 1533, also renaissance.

The property to be valued is located in CALLE DEL CASTILLO Nº9, in the municipality of ALHAMA DE GRANADA, province of GRANADA. This municipality has the following basic features.

Pedestrian areas: If you have

Parks and gardens: If you have

Infrastructure and degree of conservation:

Phone: if you have

City Gas: does Not have

At the time of the visit, the land on which is located the property to be valued has the following infrastructure:

Phone: if you have

City Gas: does not have

The property is assessed in the present report constitutes a building and is composed by the elements whose type and relative location are reflected in section one. The main building consists of two floors above ground, and their dominant land uses the residential.

His equipment consisted of:

Parking : you do Not have

Private gardens: If you have

The surface of the building, in m2 is the following:

Key elements of the building:

Isolation: do Not have

Has an older than 100 years approximately and its state of conservation is very poor, being essential to an important work of rehabilitation for its implementation are in use.

It has been estimated that the remaining useful life will be 15 years to the date of value.

In accordance with the urban planning in force that is applicable to the property this is located within urban land in compliance with all the parameters for urban development that are of application, so that it is not noticed mismatch urban one.

The property is classified as B. I. C. and has documentation of protection of cultural heritage in its entirety.

The planning of current allows change of use but for its authorization and for any actions that require the prior approval of Culture competence of the Board of Andalusia, for which it should present a draft and submit it to study.

the property was unoccupied and in a poor state of conservation.

The appraisal value has been calculated under the assumption that the property is found free of tenants, occupants or sharecroppers.

There have been easements visible affect to the property.

INFORMATION ON THE MARKET:

We have done a research of the market segment relating to the real estate are comparable with the values, with the following result:

Offer: The level of supply of real estate comparable is scarce. The features of the property valued are different to the average of the competitive market.

Demand: The sale of properties similar in the area is low. The income level of the buyer is high.

Currently the demand for real estate comparable is inferior to the existing supply.

Calculation of the cost of replacement/replenishment:

By applying the cost method, we obtain the following results:

The market data have been homogenized and weighted, obtaining as a result:

In accordance with the purpose referred to above, for which we have requested the assessment, with the criteria and methods of assessment used, with the analysis of the documentation that we had brought, and with the checks that we have performed, it is our opinion that on the date of visit the property, the appraised Value thereof is close to the

The appraisal is carried out by our chartered architect and is delivered with the property, we will deliver also market study with the support of the city council to be able to rehabilitate for commercial use in the event that the client wishes to. Part of the commission that copper Artsvalua by the management in case of allotment/sale, either in direct sale and/or auction will go to the platform for evictions in Spain.

The most important festivals in Alhama are, in chronological order, the Virgin of the Candelaria, the carnival, the Friday of Sorrows, the feast of St. John, the Procession of the Wine and the Great Feria of September.

On the feast of the Candelaria (February 2), typical of the province of Granada, the streets of Alhama light up with the "candelas" (bonfires), which lit the neighbors (the feast prepared since the beginning of January; the districts can enroll in the department of celebrations of the town hall, which brings the wood and sand needed to feed without danger of the stake, as well as wine to liven up the evening). For their part, the neighbors must compose the "merceores" (bouncers or swings) that assembled that night, to sing at the same time couples traditional.5 the origin of the festival seems to be in the procession that the two of February, forty days after the birth of Jesus, was between the convent of San Diego and the church of the Jewel. To his end, he went out to the field, arming bouncers and singing the participating couples.

The carnival brings together visitors from all over the environment, especially during the so-called "domingo de Piñata" (the Sunday after Ash Wednesday), declared a Day of Tourist Interest in Andalusia, in the parading through the streets comparsas, who sing songs relating the most curious events of the year, and "masks", which walking by making jokes to the people. Are also noteworthy the Tuesday of Carnival and the "Monday Hangover", after the Sunday of Piñata, which is usually local party.

The Friday of Sorrows (the Friday before palm Sunday) is the start of Holy Week with the procession of the Virgen de las Angustias, the patron saint of Alhama, from its usual location, the church of the Carmen.

The Pilgrimage of the Wine takes place on the 15th of August. In addition to activities related with the wine, the tasting of products of Alhama, such as chick peas or bacon jameño.

The Great Feria of September is celebrated around the 8th of that month. In the fairgrounds will be installed booths in which to make "pinchitos" and dancing and attractions for children.

In addition, around the first weekend of August (nights of Thursday to Saturday) takes place the Festival of Music Young of Andalusia, one of the oldest in Spain and which began to be held in 1966, which features performances of new bands and guest artists. The 2008 was the 43rd of the festival. Outside the village there are the old arab baths.

6 other products in the same category