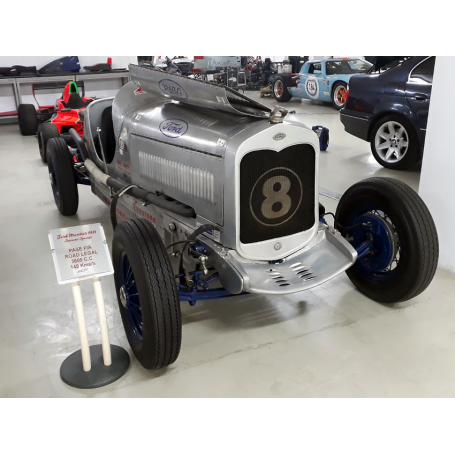 Vehicle built in 1931 in the workshops of Montier for endurance events.

Suspension rise 17 cm in the period.

The CH. Montier & Cie was, before the war, one of the independent manufacturers of cars more successful, specialised in editions of luxurious and sports cars, which are almost always based on mechanical parts Ford.

Charles Montier (June 28, 1879 in Naples - June, 1952, in Paris), known as "Le Sorcier", was a French trader and manufacturer of automobiles that had become a pilot, among others, a specialist in racing.

Charles Montier was born in Naples. The son of an Italian mother and a blacksmith's French, he spent his childhood in Richelieu, the French town in which his father, Elie Montier wore established in 1885.

Elie Montier was a modern man for his time and he liked everything related to the transport and especially the railways. The appeal of the steam machines and their influence led him to build a car of their own, and in that process, which lasted several years, he participated his son Charles. Finally the car was finished in 1895 and the results of the tests were quite satisfactory. In 1897 Elie Montier decided to trade your car with the name “Voiturette à vapeur système Montier et Gillet”, but only not a copy, as the awful noise and the “enormous” speed of the one wit no horses frightened greatly to the people of that time, that he ran scared to his step. His son, Charles Montier, I was 16 years old at the time and came to the conclusion that the type of vehicle to steam would have no future, since the combustion engine had just break through with force in those years.

After that experience with his father, Charles Montier moved to Paris. On his arrival at the capital, he went to work in “établissements Pinède“ where not a voiturette of 2 squares. When the firm closed, he set up a small workshop in the rue de Charonne and with the help of his father, started building their own cars. The first models were equipped with engines “Flat-twin” of our own production and the following engines wheeled water-cooled. With one of these last, he participated in some races. By that time, Charles Montier was already inoculated with the virus of the competition.

The excessive work that stood to build and market at the same time and the lack of ability to invest in your small business, which resulted in Montier ceased production.

On his return from military service, Charles Montier wanted to get in to work for a large manufacturer, and not had too many problems to enter to work in a Darracq, in Puteaux. Thanks to his talent and to his exceptional ability, was assigned the task of making delicate parts for racing engines.

At the beginning of 1911, Charles Montier left the factory Darracq, and moved to the town of Tours, where he opened a garage for the repair and sale of automobiles. He began with depictions of the cars Silva and Gobron, and in 1912, Ford. That same year entered a Ford of 6hp at the GP of France.

The arrival of the First World War stopped for two years, its business in the automotive world. In 1916, he sent his brother to his garage Tours with plans to convert the T-Ford into a farm tractor. This occurred three years before the arrival in France of the Fordson. It took a year of work for the development and implementation of three models. That was the first adaptation of Charles Montier was on a Ford T.

The end of the war he was caught in the first aviation regiment, and participated in the construction of ingenious devices. Designed a dashboard light that bears his name, as well as a compass with side view. After demobilization he stayed in Paris and aided financially by his ex-lieutenant who became a friend, he founded the car company, “Charles Montier & Cie.”. The workshop was located in Courbevoie and the local exhibition and sales at rue Pierre Charron, at two steps from the Champs-Elysées. The workshop soon became too small and was moved to Levallois, and later to Asnières. The business of Tours was in the hands of his brother.

Charles Montier had been aware of the match that I could get the model T Ford, performing various transformations, by lowering the chassis and powering the engine. The Ford-Montier was to become very soon the favorite in all of the sporting events of the time.

The system used by Montier to lower the chassis and boost the engine of the Ford T would be patented on the 15th of September 1921, with the patent number 541090. This transformation required parts and radiators of special size larger than the standard. The bodies were built by "Weymann". The Ford-Montier could reach 100 km/h of maximum speed. To give the car braking system that is effective, entered brakes of large diameter, which subsequently would be replaced with front brake Perrot. All these transformations are performed between the years 1921 and 1923.

The first racing car was built in 1921 and gained its first great success in the race held in Boulogne-sur-Mer. The 3 km of the race were covered at an average speed 128 Km/h.

In 1922, Ford-Montier were present in most of the competitions the French and belgians. One of the best entries was that of Dinant, in Belgium, in which Ford-Montier ran in the rain to an average of 133 km/h.

1923 was a year marked by the Great Prize of the 24 hours of Le Mans. Charles Montier was very angry with the ACF have denied the registration of his race car in the Grand Prix of Tours. That year saw the first edition of the 24 hours of Le Mans, and Charles Montier decided to embark on this project. The Ford-Montier Special 2-litre, he played with the number 19, and driven by Charles Montier and Albert Ouriou, finishing the race and qualifying in the 14th position. The maximum speed obtained was more than 120 km/h, and traveled a total distance of 1674,414 Km. an average of 69,769 Km/h.

The following year, in 1924, Charles Montier and Albert Ourion participated again with the number 23, and with the same type of vehicle but with an engine of 3 liters, and brakes mounted on the front. Unfortunately the breakage of a piston forced him to leave during the night in the back 40, after traveling 690,480 Km.

In 1925, the Ford-Montier participated for the last time in the 24 hours of Le Mans. With the number 17 and driven by Charles Montier and Albert Ourion, the Ford-Montier Special lost a wheel and had to retire on lap 54 after having walked 932,148 Km. In the morning, the race director disqualified the car by not having to travel the minimum required distance.

Between 1926 and 1928, the business continued, and a new car called Montier-Spéciale saw the light. It was equipped with the latest improvements. Bodywork 2 seater and front brakes Bordino, 2 carbs and 2 spark plugs per cylinder. The engine develops 90 hp, and the speed was 170 Km/h.

In 1927, Charles and his son Ferdinand were 9th and 10th respectively in the “Coupe de la Commission Sportive”.

1928 was the last year of the Ford T. Charles is specialized in the Ford americans, and in 1930 they built a special model based on a Ford A. Charles Montier continued to compete with Ford and later with the Ford V8.

In 1933 he built a Montier Special with two engines 4-cylinder in-line Ford a To create an 8-cylinder. This car was built on the chassis of a model from 1930, and equipped with a body car and a long hood.

In 1933, Charles Montier failed to qualify for the GP of la Baule. That fact led him to take the decision to withdraw from the competition. The rallye “Juan-les-Pins”, in 1934, was the last sporting event at the Charles Montier would participate.

In 1934, and despite having defended the Ford name on the roads and the circuits for years, risking even his own life, Ford did not renew the contract with Montier as an agent distributor.

Charles and his son Ferdinand went to work in a company of taxis of Paris, using one of the Montier Special until the arrival of the Second World War.

2 other products in the same category