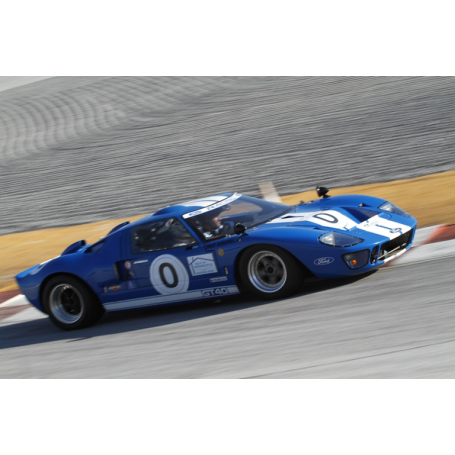 This racing car with stakes international with track record of multiple podium finishes. Also homologated for the road with your exhaust and set of wheels/appropriate covers. V8 engine, 540 hp, dry sump, adjustable suspension.

It was built by Ford Motor Company to compete in endurance races, and so do against Ferrari who won six consecutive times from 1960 to 1965.

The car was called GT making reference to gran turismo, and the number 40 represents the total height of the vehicle is 40 inches (1016 mm), as dictated by the rules of participation. It used a V8 engine in longitudinal position of 4.7 to 7.0 liters of displacement, in comparison to the V12 3.0 liter to 4.0, used by its rival, the Ferrari 330 P4.

In the beginning, the cars were simply called "Ford GT". The name "GT40" was the name of the project to prepare their cars for the endurance races. The first prototypes had the serial number GT-101 to GT-112. The production continued and the following car, the MK I, MK II, MK III and MK IV, which were numbered GT40-P-1000, up to GT40-P-1145, were officially "GT40s". Being "GT40" the name of the project and appearing in the serial number, it gives the lie to the adage that "GT40" was only a nickname. There are several MK V replicas because they were made later, using some original parts. Nothing valued by collectors, are a very economical option to enjoy the myth GT40.

In 2003, Ford released to the market a supercar based on the classic here treated, with the name of Ford GT.

The Model and light blue center stripe orange winner of the 24 hours of Le Mans.

Henry Ford II wanted a car that Ford is competing at Le Mans since the early 60's.

In the spring of 1963, Ford received rumours through a european intermediary that Enzo Ferrari was interested in selling Ferrari to Ford Motor Company. As you might know, Ford spent several million dollars in audits of assets of the Ferrari factory and legal negotiations, to put pressure on the sale of Ferrari. Only to the extent that the signature was that Ferrari realised that he could not let go of the company that bore his name, and gave his arm to twist. Henry Ford II, enraged, gave the order to his racing division to find a company capable of creating a car that could beat Ferrari in races of long duration.

To this end Ford began negotiation with Lotus, Lola and Cooper. Cooper had no experience in GT racing, and performance in Formula 1 was falling.

Victories in the 24 Hours of Le Mans

2 other products in the same category