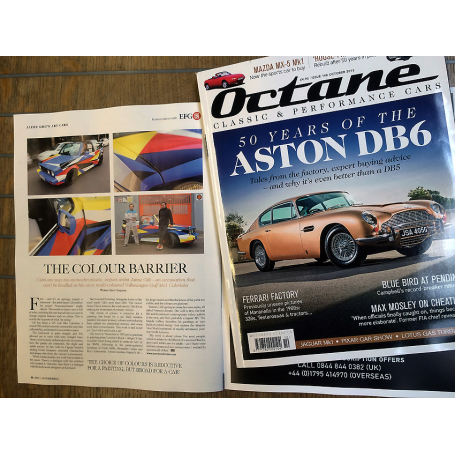 Restorations: body and paint, chrome and tires. In original perfect condition. To guarantee all refurbished. k167550.

The artist is london-based Jaime Gili binds to AMT, the workshop of Toni Chinchilla in Manresa for a series of car art classic car restored. The work of Gili is known to expand the painting beyond its traditional limits, covering canvases and large-scale projects in public and private buildings.
Painting a car is for Gili a childhood dream that began with an obvious interest in cars, but with the additional question: "why the lack of color in everyday life?" In fact, the famous quote of Henry Ford about the black is the only color available, and has lived almost as a mandate until today. If you look at the palette of colors from the car manufacturers, there are thousands of colors to choose from, but only a handful are bright red, orange or green among hundreds of navy blue, gray, and black. Professor and artist David Batchelor in his book Chromophobia (2000), studied and explained this fear to the color in the society, a phobia that penetrates in the cultural circles and intellectuals. There is a momentum generalized "chromophobe": "fear of corruption or contamination through color". Batchelor adds that "this is evident in the many and varied attempts to purge color, either by making it the property of some 'foreign body' - the oriental, the feminine, the infantile the vulgar or the pathological - or by confining him inside to the realm of the superficial, the supplementary, the inessential or the cosmetic. "The work of Jaime Gili is largely about the color, and this can not be said of many artists, or even many painters. His work comes from a Latin american tradition of abstract painting and modern concept of "synthesis of the arts" from the years 50, in which Venezuela was emphasized during the second half of the TWENTIETH century. According to Gili, however, this tradition has only a few exponents who developed in-depth study of color, geometry, light and everyday life. A list of artists developed by Gili, which is crucial for the contextualisation of the project Nomonochrome, you have to Max Bill, Carlos Cruz Diez, Hélio Oiticica, Alejandro Otero as the influences and interrelated. To begin the project, Gili chose a Golf MKI convertible. The lines of this iconic model of the 80s always attracted the artist, a teenager in that decade. The design apparently of a straight line of paint follows perfectly the slight curves of the body, and the palette of primary colors unique blend refers to the beginnings of geometric abstraction in modernist. The design is very specific contours to the shape of the car, enhancing subtly and highlighting some of its curves with strong juxtapositions of color, creating new points of visual tension. The idea is that, after this car, others to follow to complete a collection of approximately a dozen cars in as many years. Gili was born in Caracas in 1972, of Catalan parents. Has lived in London since he studied at the Royal College of Art, but also studied in Caracas, Barcelona and Paris. He has had solo exhibitions in London, New York, Miami, Barcelona, Madrid, and Zurich, among other cities. Their pieces of public art on a large scale can be seen in London, Miami, Portland and Caracas. Toni Chinchilla has more than 30 years of experience in the restoration of classic cars and has his own workshop, AMT, in the heart of Catalonia since 2002. After years of collaborating in some of the works of Gili, Chinchilla has managed to "crystallize" the ideas of Gili. in the metal workshop of Toni is located in the area where it was originally originated from the family of Gili, and very close to the company where the father of the artist he worked for the european automotive industry.

The Volkswagen Golf II is a model of car produced by the German manufacturer, from 1983 to 1992.

After the myth of the Golf 1, the new second-generation Golf was presented in Germany in the autumn of 1983. And replaced by the Golf III in 1992.

The Golf II was available in 3 or 5 doors with rear door. The variants of sedan 2 and 4 doors were sold under the name Volkswagen Jetta . Not developed any convertible version in the Golf II; in contrast, the Golf R Cabriolet continued to be produced, subject to minor modifications.

The trim levels are called the base, C, VL and GL with a top-of-the-range called Carat (until 1986) and then GT (in 1987). In North America, there was only a basic model prior to 1986, then the models GL and GT were added in 1987 until 1990 or only GL remained until the end of the life of the model. The model GTI was sold from 1985 to 1987 and from 1990 to 1992, and GTI 16v from 1987 to 1992. In Japan the range consisted of Ci / CLi / GLi-ends sharing the same four-cylinder 1.6-liter engine, replaced shortly after. by a 1.8-liter, both catalyzed. Over the years, many limited editions came out in different markets, distinguished by cosmetic changes or additional equipment. In general, took the form of packages of options to improve the sales of the base model (CL, GL, etc). In some countries there was a final additional, so-called TX in Austria, or JX in Yugoslavia.

The Golf II is the latest generation of Golf with petrol engines carburados, all engines Golf III with injection in launch, in order to comply with the european legislation stipulates that from 1992, the gasoline-powered vehicles must have a catalytic converter or fuel injection

The saga Golf GTI just GTI in the united States) was perpetuated by the second generation in versions 3 and 5 doors. Just like the last generation of GTI, I had an injection of 8 valves 1800 cm3 delivering 112 horsepower.

In 1986 (model year 1987 in North America) was added to the range a Golf GTI 16S ( GTI 16V in the united States). In this version, the 1800 16 valve now deliver up to 139 horsepower (129 horsepower with a catalytic converter) and the car distinguished itself from the normal version by badges discrete "16S" red and black. The GTI in North America were later equipped with a 2.0-16v is different, taken from the Passat and the Corrado European.

In August of 1989, just as the classic Golf, the GTI is subjected to a new design bumper with large u.s. standards become the standard. In 1990, added the version G60, with a valve 800 cc to 1800 cc with a compressor G , and developing 160 horsepower. This version should not be confused with the very rare G60 Limited (see below)

In February 1986, Volkswagen presented the first unit of four-wheel Golf. This Syncro Golf was only available in 5 doors, with 1800 cm3 developing first 89 and then 97 horses. Its all-wheel drive was developed in Austria, Daimler-Steyr-Puchand used a viscoacoplador and a variable timing between the front axle and the rear axle, up to 48% of the torque can be sent to the car. rear. Due to its high price (in 1986, Syncro was 30% more expensive than a drive model equivalent), the model sold poorly, and is now quite rare: between 1986 and 1989, only were built 26,000 Syncro.

The system of traction to the four wheels was fully automatic and barely visible. The car is distinguished only in the back for badges discrete "Syncro". Was not added to any counter or button inside. The transmission is shortened to hide the overweight of 160 kg caused by the weight of the transmission. The rear seat was 30 mm forward and the floor of the platform is raised, reducing the load capacity by 25% in comparison with a Golf conventional

In 1989 came the Golf Rally, designated as the a version for homologation in rally . He distinguished himself by his wings inflated massively (similar to the Audi Quattro , the BMW M3 E30 and the Lancia Delta Integrale ) and their projectors are rectangular. This model had the transmission Syncro, a transmission cable and a motor compressor with motor G, 1763 cc-derived G60-1800's (the engine was lowered to comply with the rules of equivalence of rally). .

Were five hundred cars in the factory of Brussels, which are sold by 50,000 German marks , almost double that of a Golf normal. The Rally developed 161 horses

None of these copies were sold officially in the united States. Two were sent officially to test, soon joined by five others. The vice-president of Volkswagen of America, James Fuller, was in favor of adding to the lineup is american. However, Fuller died in December 1988 aboard the flight 103 Pan Am , which exploded over Lockerbie in Scotland after a bomb thrown by terrorists from lebanon exploded in the cargo hold; this death limited the chances of the Rally Golf were imported to North America.

Subsequently, Volkswagen of America decided that the rallye Golf would be too expensive for the u.s. market, where Volkswagen was considered a builder of low-cost

There is a version extremely rare in Golf, combining all of the high-end options available (leather interior seating and electric windows, ABS, power steering and sun roof) platform with the Golf Rally. Designed and built by division Volkswagen Motorsport hand, only produced 71 Golf 2 G60 Limited. This version had a version G60 four cylinder and four-cylinder engine, a transmission , sporty and all-wheel drive Syncro. These cars were built mostly in the bodywork of 5 doors due to the strength of the chassis of this version, even if there were 3 doors. In terms of appearance, the Limited had wheels BBS RM012, bumper american-style, a grid of two lights with a blue border, a logo, VW black and the VW Motorsport, the rear lights dark of Hella and a plate numbered specific. In 1989, these vehicles cost approximately 68,500 German marks and sold mainly to the executives and managers of VAG . Handed out 207 horsepower and went from zero to 100 km / h in 6.4 seconds, making this version in the Golf is the more powerful of the history of the brand, until VW comes out of the Golf IV R32. strong 238 horses in 2003.

There was also a version called Golf Country, which produced 7 735 copies, built by Steyr-Puch in Austria and is specifically designed for the driving off-road . He distinguished himself by a greater travel of the suspension, an awd Syncro, a distance to the ground increased 21 cm, bars front and rear, a plate that protects the engine and the transmission mounted under the car and a wheel emergency mounted on the hood.

In Europe, it had an engine 1800cc 8v which delivered a power output of 98 horsepower. Also produced 1500 Country Allround, with a finish that is streamlined and without the luxury equipment such as leather steering wheel or power windows; 558 Country Chrompaket, bar bull chrome, sunroof and leather interior and 50 Country GTI equipped with the Golf GTI 114 1.8-horsepower, 1.8, sold exclusively to the staff of VW. The Golf Country enjoyed a real success in the mountainous regions of the Alps in particular

1 other product in the same category