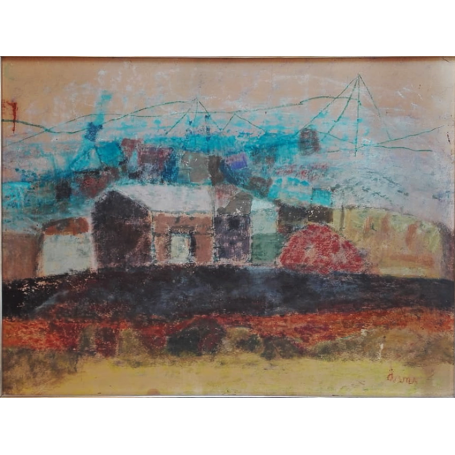 He began his training at the School of Arts and Crafts in A Coruña. At the beginning of the fifties he moved to Madrid, where he spent the rest of his life, and attended the classes of the Circle of Fine Arts and the School of San Fernando. He began to exhibit in 1950, in A Coruña. In Madrid he did it for the first time in 1953. Since then, his work travelled all over Spain and many foreign countries, as she was invited by the Spanish Government to important group exhibitions, especially in Paris, where he was granted the Medal of the town, and in whose Museum of Contemporary Art earned the maximum reward.
Also won prize of the Fundación March, travel bags from the Ministries of Foreign Affairs and National Education, and awards and medals of the county Councils and town Councils of Córdoba, Badajoz, Alicante, etc, Their work is extended by many parador hotels, and official buildings, and public. Is represented in the Museums of Contemporary Art in Madrid, in all of Galicia and in a good number of the provincials of Spain. The painting of María Antonia Dans, sometimes described as a "naif" is, in reality, a neo expressionism root deliberately ingenuista, emparentable with modes of embroidery people, root barroquista. His landscapes are elemental, with something of a mosaic. The work in the field, the world of the sea, are those with a reference to sweet and as a child, in their very hot and contrasted, in which abound the carmines, green glittering, blue, pure, the yellow ones. The material is thick and in the drawing there is as a break in the line, pretending to be an insistence of imaginary clumsiness that ultimately does nothing but add grace, delight, this peculiar and unmistakable expression plastic. Nothing could be further from the paint Mª Antonia Dans that any show of grandiloquence. On the contrary, the emotionalism, the maximum simplicity, the bucolic, including chairing a task is deliberately limited in the theme and yet so rich, so there is a flowering of variations. When we look at this painting it seems that ahondamos in the attic of our memory, to find the most happy moments of childhood. One would like to inhabit the worlds of this painting and be installed forever on them, because they are brimming with sweet kindness. -Areán, Carlos-Antonio: Young figuration in Spain. Madrid, Publications In Spain, 1964. -Campoy, A. M.: Dictionary critic of contemporary Spanish Art. Madrid, Iberian European Edic., 1973. -Bustamante, Juby: Mª Antonia Dans. Madrid, Ministry of Education and Science, 1974. -Mon, Fernando: contemporary Painting in Galicia. A Coruna, Caixagalicia 1987. -Pablos, Francisco: galician Plastic. Vigo, Caixavigo 1981. -Moreno Galvan, Jose Maria: Introduction to Spanish painting today. Madrid, Publications, Spanish 1960. -Gaya Nuño, J. A.: Spanish painting of the TWENTIETH century. Madrid, Iberian European Edic., 1970. -Pablos, Francisco: a Collection of Adriano Marques de Magallanes. Vigo, Excmo. Hall, 1992.