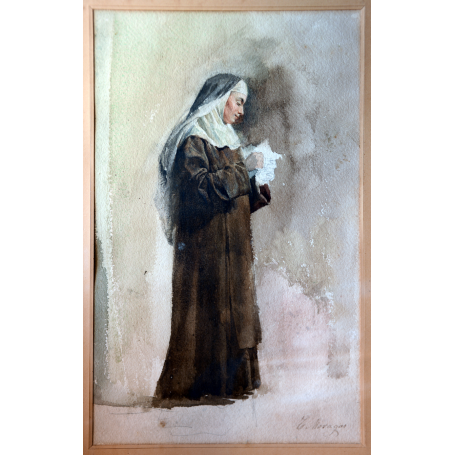 Still very young, Moragas moves to Barcelona, where he began working in the workshop of the goldsmith and engraver José Pomar Llaró, at the time, I referred to the classes of the School of La Lonja. In this last met José Tapiró and Baró and Mariano Fortuny, and had as teachers, the purists nazarenes Claudio Lorenzale and Paul Milá Fontanals. After attempting without success to obtain a pensioner, moves on their own to Rome, where he settled in the studio of his friend Mariano Fortuny. Follower of your aesthetic, focused on the theme of casacones was a painting of large commercial acceptance, with works such as “roman Countryside with oxen”. After nearly a decade in the Italian capital to go to Paris in 1866, where he settled until his definitive return to Barcelona in 1876. Already in Spain she has combined her artistic activities with the foundation of the School of Watercolor painters, later Artistic Circle, and an academy of drawing that were disciples illustrious figures as Anglada and Rusiñol. He also stressed teaching at the School of Fine Arts of Sant Jordi of Barcelona and the Academy of Arts and Crafts of Vilanova i la Geltrú, as well as its role as an artistic advisor at the Universal Exhibition of Barcelona in 1888. He also designed the swords offered to the general Prim, and O'donnell, as well as the cover of the album presented to queen Elizabeth II. He worked in the oil and watercolor, as well as historical topics, customs, Catalan, topics moors, the landscape and the portrait.

In this particular case:

The definition of the sketch unfinished, but on the other hand the final touches on a habit and the expression of the face are dislumbres of a domain unequivocal stroke difficult of the “aiguada”.

Each order will have a dress, headdress and veil, laden with symbolism, all of them, but if there is something that all the monastic orders have in common, is the habit. The habit, or tunic, is characterized because it is loose, it reaches to the feet, and usually black, blue, brown, white..., colors that depend on the congregation and whose origin reaches back to the convents, medieval, enclosing symbolism on many occasions shared with the monastic orders of men, that is to say, the monks.

Formerly, under the habit, she wore two petticoats, one indoor and one outdoor, both dark. Some congregations use over the habit a piece of cloth that covers the chest and back. Is the so-called herringbone.