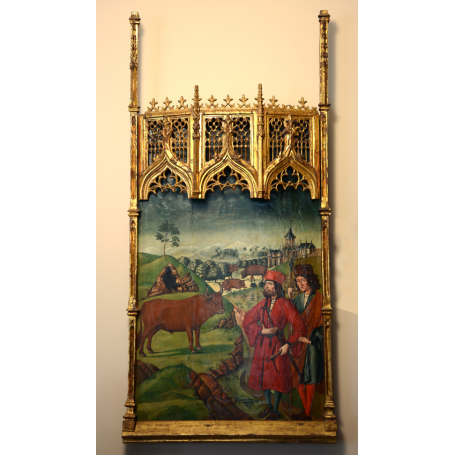 School of Burgos-related master of Ameyugo Scene Of the Miracle of the arrow that turns against Gágano instead of hurting the bull.

Oil on wood, in part, tempera on wood.

Bartolomé de Castro is a painter trained in the orbit of not only two great painters of scope palencia, Juan de Flandes and Pedro Berruguete; it begins with the influence of Fernando Gallego that combines, also, the two teachers castellanos-leoneses as the Master of Astorga and the Master of the Santos Juanes. It attempts to order the development of his work with the contribution of new tables and rebuild some altarpieces. 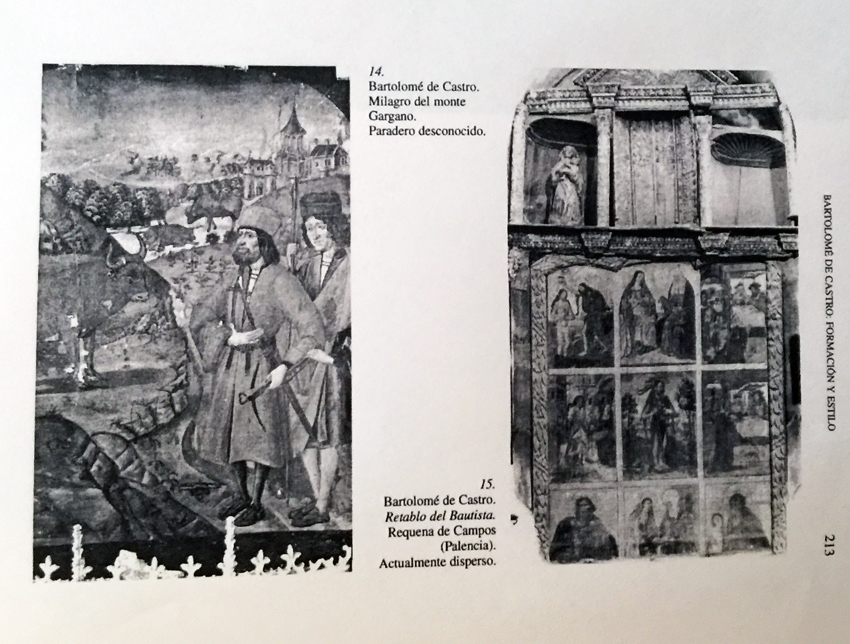 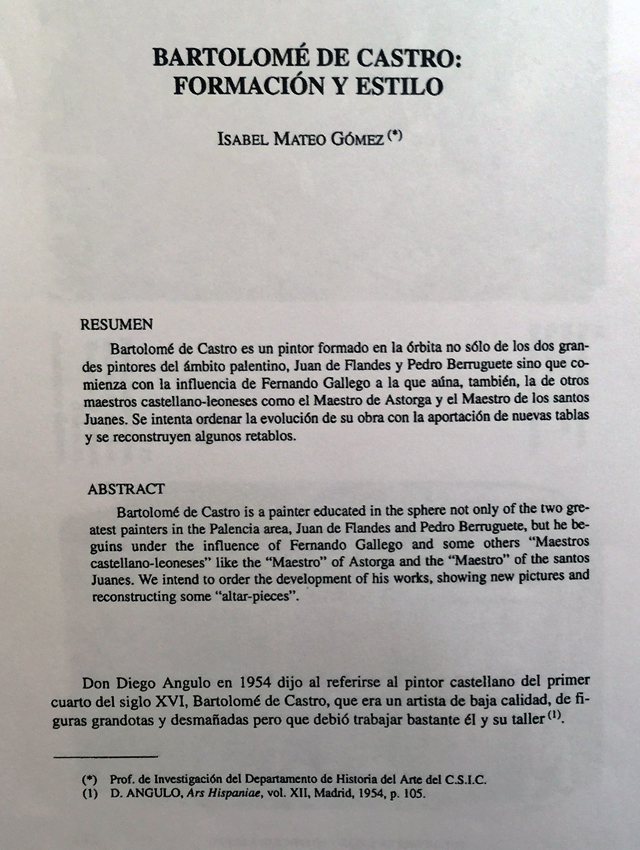 This scene, it belongs to an altarpiece dedicated to Archangel Michael, was transferred to canvas and in some points is observed still, in part, the weft of the fabric-probably in the last quarter of the NINETEENTH century, and in the summer autumn of 1985 has been set back on the wooden stand of pine in the grill slats, -Eleven horizontal glued to the table, and seven vertical hold-.

Carpentry-frame and canopy depth - is of pine wood, with good preparation of bol and golden top, well-placed and burnished with a stone of agate.

In the making of the painting, the author, on a scene with a positive perfectly delimited, not had to distinguish (as in other tables of the same altarpiece), the parties that had been working for the oil that was supposed to make to the temple, unifying the preparation of the table, scoring a drawing bluish to the human figures, animals, landscapes and architectures, with thick strokes and juxtaposed and crossed, in order to mark the main lines, in addition to volumes and to indicate from the base of the values that then had to have the color.

On the drawing blue that can be seen perfectly in the face of the server Gárgano and also in other parts of the same scene, the painter was spreading the colors, although, sometimes, the color does not follow the same lines as in the initial drawing. This latter fact is easily verifiable in the landscape of this composition: in this occasion not only are the differences point between the area defined by the drawing and which is occupied by the color, but the real changes, since the landscape is painted is different from the one that is noted first with the drawing.

The basic colors, pink, brown, green, red and orange, acquire different shades, precisely in function of the technique of the oil which allows it to pull the colour range and mix without forming an opaque (transparency of the initial drawing and modeling of the faces, dresses, sky...).

However the technique to oil painting, the painter applied it as if it were egg tempera, following the line flamenca, within which is this work. As we have mentioned above, this table formed part of an altarpiece dedicated to Archangel San Miguel, of which we know the existence of other compositions:

- Scene of the fight the archangel in San Miguel with the fallen angels.

- Scene of the bishop Siponte and the appearance of the archangel on Castel Sant Angelo, in addition to

- the predella with the figures of Christ a man of Sorrows, The Virgin and Saint John and other saints.

In this altarpiece the scene of the Miracle of the arrow that turns against Gárgano instead of hurting the bull occupied the bottom of the street left (from the spectator): 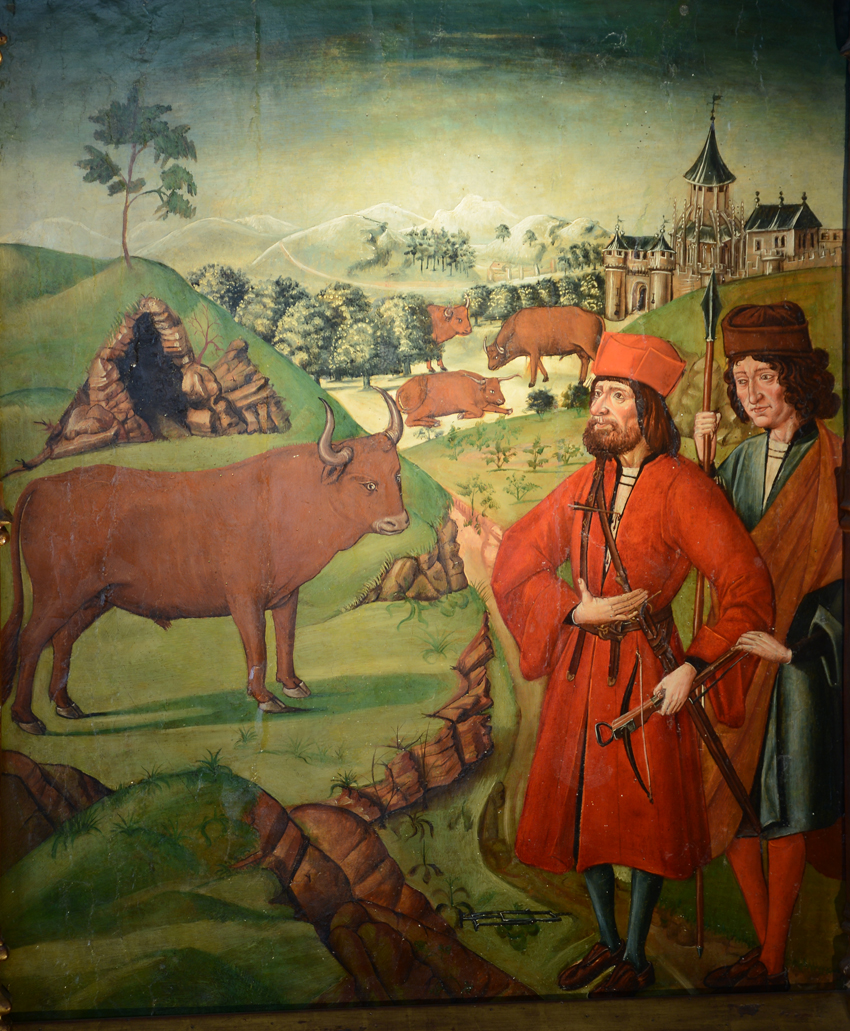 The and the scene of the miracle of the arrow that turns against Gárgano instead of hurting the bull, both by the compositional scheme as the types that it uses, is located within the pictorial tradition Spanish of end of century XV and beginnings of century XVI that accuses, to a large extent, the impact of flemish painting, and is linked, particularly, with the sequence of the workshops of Palencia and Burgos, with all the basic components of these schools, coupled or reduced in large part. The tendency to realism is obvious in the interest in individualizing the characters, even though they share common characteristics in the faces, dresses and others, they differ by the intensity of the color, by different cutting of the hair, the beards, by the variety of hats and costumes, etc.... It is also evident the attempt to make the scene more reality, and therefore stands in an open space, with landscape in the background that always exceeds the size of the figures placed in the foreground, with mountains, trees, architectures, conventional castles or cities with cathedrals, towers and palaces within the walls. In addition, in this composition, the realism is also demonstrated by the translation of the shadow of the Bull on the ground.
It is precisely these signs of realism and the types that approach this painting to the schools castilian of Burgos and Palencia, in which it is obvious the legacy immediately of Fernando Gallego and his followers. It is therefore not strange to find concomitances typological with the works of Bartolomé de Castro active in Palencia to 1490-1510, especially with the table of St. John the Baptist to heroes of the parish church of Portillo (Valladolid), in which the figure of the executioner may be related to the Gárgano of the present work, and the same thing happens with the figures of Herod and of the musician of the altarpiece of Santa Ana, the virgin and St John the Baptist, from Requena de Campos (Palencia), or with The San Andrés collection Godia in Barcelona.

At some points, the scene and the figures are reminiscent of the works by the anonymous Master of Geria, but the author of the scene of the miracle of the arrow that turns against Gárgano instead of hurting the bull is more precious, knows better the technique and get bigger and better results.

On the other hand, this work can be associated also with the paintings of the Master of Burgos, Alonso de Sedano, and with the works of his workshop and circle, for example, with the table of Christmas of Museo Diocesano of Burgos (from the old main altarpiece of the cathedral as well as the other tables of the Flagellation and the Crowning with thorns of the same altarpiece). In which the types of male can be considered to be precedents of our work. However, it is possible that the author of this scene has not directly derived from the Master of Burgos, but a follower right away or close as the so-called Master of Ameyugo (denomination in function of the altarpiece from the population). In this sense, the author of the scene of the Miracle of the Arrow... turns into a performer and simplifies the compositions, models, and drawing pictorial of the Master of Ameyugo, possibly, from some works such as the altarpiece of the saints Apollonia and Lucia, or in other works of the Diocesan Museum of Burgos (Tables of Christmas and epiphany), attributed to that master.

For all these reasons, and taking into account a greater closeness of typological with the school of Burgos's Teacher of Burgos and Master of Ameyugo above all, it is important to situate this work within this line, without forgetting the proximity of Palencia, and, not forgetting, of course, the difficulties of filiation direct regard to a painter, when it has not yet been structured with correction the paint castilian of the second half of the century: FIFTEENTH and early SIXTEENTH.

For the time being are unknown works by the same author.