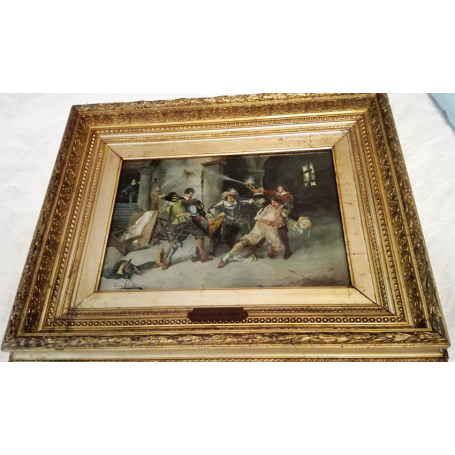 Son of also the painter Eugenio Lucas Velazquez, follower of Francisco de Goya, inherited his father's speed and ease of use of the brush. Her brushstrokes, short and thick, denounces his profound admiration for the great Spanish masters, such as Velázquez, Carreño, Murillo and especially Goya. Your painting is away from the academicism and is loose and undone, grounded, and highly chromatic, while his subjects are spoken of the people and their customs.

He studied at the Special School of Painting, Sculpture and Engraving in Madrid, where he was known for his mastery as a draftsman. He completed his training visiting regularly the Museum of the Prado, where he copied several works by Goya. Also, he frequented the intellectual circles of Madrid of the late NINETEENTH century, until it was discovered by the patron José Lázaro Galdiano, who appointed him his house painter and he was commissioned the decoration of his palace, Parque Florido. Among the honors that he received in life highlights the Knight of the Order of Carlos III. It preserves the work of Lucas Villamil in the National Gallery of Washington D. C., the foundations Lazaro Galdiano and Mapfre of Madrid, the Fine Arts Museums of San Francisco, Havana, Badajoz, spain and Álava, the J. Paul Getty Museum in California, the San Telmo Museum of San Sebastian, the Carmen Thyssen-Bornemisza collection and the Museo Camón Aznar.

Lucas Villaamil is expressed as a technique for rapid and precise, inherited from his father, of the brush strokes short and matter-of thick, alternating, occasionally, with huge thick color applied with a certain disorder in the first terms. These technical features, so typical of the painter, is seen in this canvas forms severed, and soft, decomposed in pure touch of color sticking together. Even in the first terms, as in the dress of the lady sitting to the left, the folds and the shapes disappear in a nuanced stain colors.