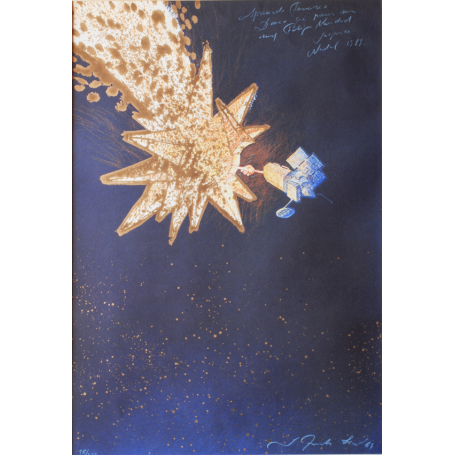 Does not have glass.

He began his artistic training at the age of ten, at the Academia Valls, school where he studied Antoni Tàpies, among other artists of the time. With large concerns in those early years he became interested in the informalism, which belatedly had been introduced in Spain.

From 1962 to 1967 he studied at the Escola de Belles Arts de Sant Jordi of Barcelona (section of Painting). At the same time that he undertook the study of painting is raised seriously, the theater and the stage, and starts his studies of Theatre and prepares jobs for various companies. Leads the stage direction of the Section's Dramatic Circle Catholic Badalona. In his second year of studies, started a distancing step-by-step abstract painting. Moves toward a new figurative art in which forms become more restful and intransigent.

In 1967 finished studies of Fine Arts and obtained a scholarship of the Fundación Amigó-Whose.

In 1968 he decided to dedicate himself to the stage where you can be close to his two great passions. The painting and the theater. Is installed in Valldemossa (Mallorca), to enter fully in the cultural activities of the time and endowing them with such originality and know-how that reflected in their work. Works as a stage manager scene of a famous festival hall: Tagomago, illustrates posters and paints, among others, the drawings of Maurice Chevalier, Louis Armstrong, la Chunga...

After a brief period of crisis, installed a workshop in Valdemossa and started a famous series of portraits and self-portraits. In July of 1969 founded the "Artestudio" next to Carmen Crespi, a fellow of the School of San Jordi. Assume the stage management of the theatre troupe AUBA of Ferriol.

In 1971, organized in Galleries Coast to his first exhibition in Mallorca. Begins receiving many commissions for portraits and you should leave the stage direction and disrupt his theatrical activity.

Robert Graves, poet resident in Deia (Majorca) makes the presentation of one of their catalogs in the year 1973.

Leaves Valdemossa to be installed in Palma on calle de la Portella, the current site of the museum.

From 1974 to 1975 is set in Madrid. Celebrating its first national exhibition in the Gallery's Old Home of Serrano street, where he set up a study that later moved to the Plaza de Colón and starts to receive orders of various personalities from all over the world. That autumn he travels to Copenhagen to perform the portraits of several members of the Royal House of denmark. In the 75 travels to Sweden, installed his studio in the street Karlavägen in Stockholm. Paint the Princess Cristina. That same year, the magazine Paris Match devotes an extensive article. The REAL SOCIEDAD VASCONGADA charged also, a portrait of the then Prince Don Juan Carlos de Borbón. Tirelessly, he traveled to Brazil and painted Juscelino Dubischek, the President of the country. Has a scheduled exhibition at the Museum of Modern Art of Rio de Janeiro that has to suspend for political reasons.

In 1977 he founded the Free School of the Mediterranean, whose headquarters are located in Palace Verí in Mallorca. During this year he traveled to the united States where he painted several portraits of the Kennedy family.

From 1978 to 1981 and presented in the Gallery Pyramid several portraits (Dewi Soekarno, Mme. Rothschild...), makes his first exhibition in the Principality of Monaco and exhibited at the Gallery Bearn de Mallorca. It also exposes in Monaco Fine Arts, Monte carlo.

In 1982, inaugurated in Barcelona the headquarters of the Free School of the Mediterranean, in the calle Diputació 329, where attended by students from all over the world. The school enables you to develop your strong teaching vocation, becoming its exhibition halls, the point of the culture of the time.

The December 23, 1985, will be produced in the Theater of the opera of Monte carlo, the premiere of the ballet “24 hours in the life of a woman” by Stephan Zweig, with music by Hervé Niquet , choreography by Pierre Lacotte. The costume designs and the sets the do J. Torrents Lladó. To work on this, the summer of that year had formed a team of collaborators among their students.

In 1988, he was named “ Personality of the Year in the World” award, established in Paris in 1970, which recognizes work in the field of creation and fine arts. In addition to his activity as a painter, he appreciates his special sensitivity to design and graphic creation.

In 1989, through the efforts of Tsunehiko Tamura, some executives of the Gallery Prova of Japan visited the studio of the Street Portella Palma and you will reach a series of agreements for the international promotion of his work.

In 1990, in the los Angeles Art Expo, his work, leads the program Prova USE. It also exposes for the first time in Japan. Presents "Landscapes and Light of Majorca". Your collection visit the major cities of the country, spreading the wonders of the Island through his painting and giving Mallorca a valuable tourism promotion.

In 1991, Collaborates with UNICEF in Japan designing for the Art Aid a poster the benefit of the needy children of Asia. In April of this year, The government of the Autonomous Community of the Balearic Islands commissioned a portrait of the Kings of Spain.

In 1992, he traveled to Japan, featuring a collection of LANDSCAPES OF MALLORCA in the main cities of japan.

In 1993, travels to London and later to Venice, a place that feels true passion, and that comes often. Noteworthy are his watercolors painted of the city.

The October 6, 1993 dies of sudden death, caused by an aortic aneurysm.

Bequeathed to us a vast and rich pictorial work, surpassed only, according to his friends by his personal charm and human values only.

His artistic beginnings lie in the field of abstraction, but quickly abandoned that interest and tries to solve technical problems that arise in the figurative art. The rest of his intense and short professional career, devoted to figurative art. Is dumped in solving technical problems differently in the disciplines to which it is dedicated. The characters to be portrayed wearing luxurious clothes timeless, hiding sometimes behind venetian masks and being surrounding by fabrics damask.

The few contemporaries who are dedicated to the same thing, they do so from a focus purely of the time, devoting himself, among other things, the influences of photography and the new technologies in their works. Experience, based on your present: the contemporary world.

J. Torrents drenching the soul of the model or of the landscape to recreate it on the canvas, trying to convey his inner life, its spirituality, its essence. That sets it apart from its contemporaries united in addition to a remarkable capacity of synthesis and a power uptake of the reality out of the ordinary. The point of the composition and the skill of the art are fused with mastery in his work.

Luis Sagrera defined so admirable: “Of loose brushwork, agile, deeply marked, but with an admirable ability to change tempo as required in the treated area”.

He described the art world in which he lived as “within a huge confucianism, and plunged in a disparity of trends”.

He built his own present. I will tackle in a unique way their paint, achieving in little time and counter to put a dent in that confusing moment of art.

One of the things most surprising in his work is his independence, his freedom, his rebellion, his insatiable curiosity in the field of design, which makes it work with various agencies and firms, and design from scenarios for various plays until the logo is commemorative of an important to add a signature cava.

You have very clear what you want out of the art and runs away from conventions, is investigating a unique way in different fields, manufactures its own paints, makes his own colors and achieve a chromatic richness nothing usual in the paint. His brush strokes are wasting color, passion, and a deep and personal study of the model. Boasts a skill carefully learned, his pictures reflect this perception and development of a detail a fruit of the eye is privileged, a careful application of all his experience. Stealing, as expressed by Basilio Baltasar of each time what mattered most to him, what he could master with a master, whose example he wanted to find the masters of the renaissance.

Lanthemann, Art historian describes it:“... Torrents Lladó in your painting is just one more in the historical tradition of the great painters, which is manifested in their sensitivity to the color, depth psychology, and his clear philosophy of life. Often the public of our century, the question whether there is today, someone that know how to paint with the quality of the artists of great pictorial tradition european. We can answer: Yes, it is Torrens Lladó”

J. Torrents Lladó has been the object of attention of large and prestigious international photographers: David Hamilton, Helmut Newton, Cecil Beaton, Lord Snowdon, Richard Avedon, Yasuo Sano, Eduardo Momeñe, Juan Ramon Bonet, Miguel Font, have been in contact with him and captured in a masterful moments of his life and work.

Mastered all the techniques (charcoal drawing, watercolor, oil etc) Maybe his worldwide fame reached in the portrait, coming to be regarded as one of the best portraitists of the TWENTIETH century, but his work in general makes it imperative to mention that when we talk about art in the TWENTIETH century.

His House Museum was installed definitively in the year 2002, in the calle de la Portella 9, Palma de Mallorca. There are two invaluable collections, which comprise: a belonging to the Foundation J. Torrents Lladó, created shortly after the artist's death, and the collection of the Govern de les Illes Balears. In any case, there are two collections that show all facets of painting of this artist. With minimal changes, to be able to maintain the same atmosphere that it had in the life of the painter.

The permanent exhibition consists of 120 works, distributed throughout several floors of the House. Include oil paintings, drawings, watercolors, sculptures, and some personal items that recreate the life and work of the artist.

His House Museum is one of the artistic treasures of Palma de Mallorca, seen that magic and sensibility so particular that the artist possessed.