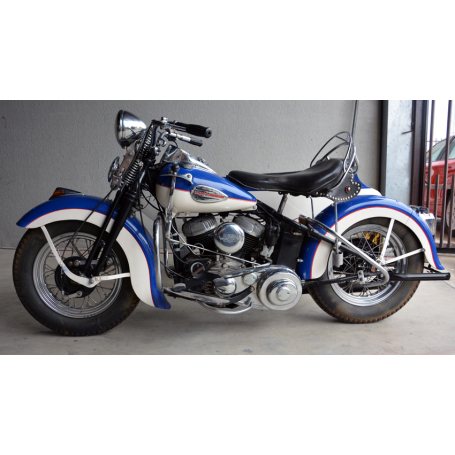 Without the documentation. Such as it is. Restored.

Awesome WLC 750 cc which stands out for its state of conservation and for the care with which he has been treated. It has been rebuilt and restored respecting the original model of 1942. With battery dynamo and a twin engine four-stroke.

The WLA was a model that produced Harley-Davidson motorcycles with specifications provided by the US Army in the Second World War, based on the model civil WL. The first letter designates the model refers to the series that was then the who was most recently the 740 cc in a engine flat head. “L”, to the compression of the engine. The “A” refers to “Army”: the U. S. Army, as the model for the canadian army (WLC) would be something different. It was manufactured between 1940 and 1945, and then again between 1949 and 1952.

He began to manufacture this model in small numbers in 1940, increasing the production to enter the united States in the Second World War, reaching 90,000 units. Subsequently, many of these units were then brought to allied countries after the war.

The original engine of this model was created looking for reliability. In modern terms, the low-compression (5:1), it can work with gasoline, 74 octane gasoline, which was existing in their time of production by the lack of quality of the refined fuel.

The presented here has a sidecar original, and the accessories (protector of the legs, etc) restored. Your state is really outstanding, in all senses, which makes this lot a unique opportunity.

Harley Davidson Inc was founded in Milwaukee, Wisconsin, united States, in the first decade of the TWENTIETH century. The history of this brand began in 1901 when William S. Harley worked in an engine coupled to a bicycle, and, with his friend Arthur Davidson, worked on his bike, completed in 1903.

In 1905 they were already manufacturing complete machines, and a year later built their first factory (now its “headquarters”). By 1913 it was necessary to demolish the factory to build a larger one, and made about 15000 bikes for the army in World War I, the first time that this vehicle had a role in combat.

By 1920 they were already the largest manufacturer worldwide, and sold their iconic bikes in more than 65 countries. Research technology (engine, etc) not ceased since its early days, making that one of their machines off the bike, exceed 160 km/h for the first time in 1921, for example. Harley-Davidson survived the Great Depression, and provided to the US Army motorcycles in World War II, continuing afterwards with the production of civil.

By 1980 he suffered with the import of japanese bikes, cheaper than what was recovered thanks to a levy of 45 % on motorcycles of import and the decision of the group of 13 investors who had purchased it in 1981 less than those same japanese bikes imported.

Today, it continues to be a brand with a style so their own that their machines are unmistakable even to the eye non-expert and very valuable to the connoisseur

4 other products in the same category