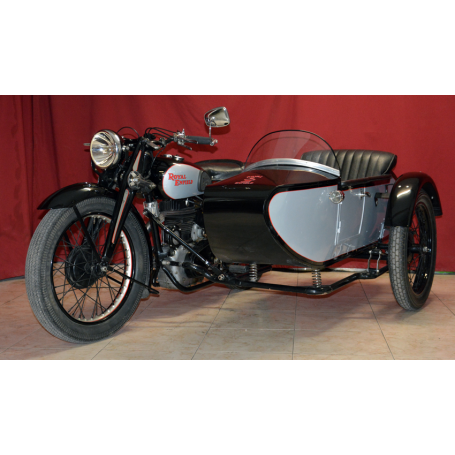 Engine: 500cc. Commissioning in our workshops.

With all the guarantees. Insurance. Itv the day.

Royal Enfield started in the United Kingdom to make bicycles in 1892 and vehicles quads around 1898, under the name Enfield Cycle Company. Their first motorcycles were produced in 1901, using engines from other factories. The production stopped in 1905 and began again in 1910 when they made a 425cc V–Twin (2.25 hp).

Royal Enfield started using its own engines until 1914 when they created an engine of 225cc two-stroke and a 425cc V-Twin. After the WW I, produced an engine larger 976cc Twin.

In 1924 they launched their first motorcycle of 350cc four-stroke using an engine JAP. This was soon replaced by his own engine of 350cc side valve and another valve to the head. By 1927, Royal Enfield produced a 488cc with a gear box of four speeds. In the following decade there was a production of bikes from a variety of models, from a tiny 146 cc. two times, the “Cycar” to a 1140 cc. V-Twin.

In 1936 the Enfield 'JF' was considered to be a machine gorgeous and gentle, with a motor very modern and efficient 500 cc. and four valves producing 19 bhp. Before the war, the spending cuts reduced the valves to two. During WW II, the company made motorcycles of 125 and 350 cc. for the Army, but had few production changes.

In 1931 he presented the engines wheeled under the name of 'Bullet' (Bullet). This bike had an engine inclined and valves exposed. The model G 1935, was the first who took a look 'modern', with the cylinder vertical, I had a cascade of gears that worked as a magnet and an oil pump eccentric double-without end. During the following years were made engines of two -, three -, and four valves in the cylinder head. This model was presented again in 1949, but as a bike totally renewed.

In 1954, the model G was discontinued, effectively replaced by the Clipper model 250 c. c., but the J2 continued to offer to those riders who still wanted a box rigid, mainly for use with a sidecar.

Between 1955 and 1959, Royal Enfield sold bicilíndricas in the united States under the brand name Indian.

The british company was sold in 1962 and the line of the Bullet abandoned.

In 1967 they closed the factory in Redditch, but continued making the model 736cc Interceptor.

Royal Enfield closed its doors permanently in 1970. Approximately 200 of the engines of the Interceptor remaining were sold to Rickman to drive to the sports Rickman-Mestizo, produced in limited numbers in the 1970s.

In 1949, the Bullet 350 cc was launched in India when Madras Motors won an order to supply motorcycles for the Army. Began assembling the bikes that were taken apart from Great Britain, then began to build the boxes, then to assemble the engines and finally to manufacture them. Due to a trade agreement, Enfield India continued to produce series for over 30 years the Bullets in the same way that they were made in England in 1955.

At the end of 1995 they acquired the name Royal Enfield to exploit it until now.