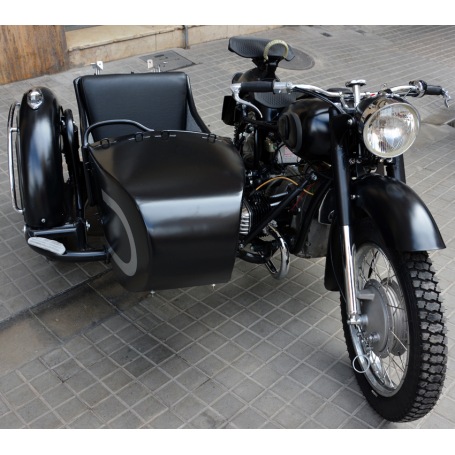 With full warranty from refurbished parts. Everything included except for transport and change of name, only collection and net price without any commissions or taxes.

Dnepr ( Russia : Днепр, Ukrainian : Дніпро; Dnepr) is the brand name of big motorcycles produced in Kiev , Ukraine. It has been in use since 1967.

Motorcycles have been produced in Kiev since 1946 at the motorcycle plant Kiev (Kievski Mototsikletnyi Zavod (KMZ), Киeвский Мотоциклетный Завод, (КМЗ)). The initial production was of a 98 cc two-stroke model that was confiscated from the German firm Wanderer as reparations. The original design for motorcycles KMZ heavy, and their cousin the IMZ , is taken from the pre-Second World War German BMW motorcycle R71, which the Soviet Union licensed in 1940. The plant and equipment necessary to make the M-72 (the derived soviet of the BMW R71) was transferred from the factory of motorcycles Gorkiy (Gorkovkiy Mototsikletnyi Zavod, GMZ located in the city of Gorky ( Nizhny Novgorod ) in 1949. The first group of M-72 motorcycles were produced in 1952 with the supply of 500 engines from IMZ. KMZ In 1958 replaced the plunger framed M72-N with the framing swingarm (K-750. In 1964, KMZ introduced a military model, the MV-750 with a differential two-wheel drive to the sidecar wheel. In 1967, to celebrate the 50th anniversary of the Great October Socialist Revolution , KMZ launched their first OHV engine in the "Dnepr K-650. Unlike the engines before sidevalve with their crankshafts, roller bearings , this engine appears a crankshaft bearing sleeve which is located in the Second World War Zündapp KS750. The K-650 was superseded by model MT-9 650 cc, which was available in two models single and sidecar (often referred to as the best "Cossack ") as it was reliable and featured a new transmission with reverse gear and a mechanism for disengaging the automatic built-in pedal riders. The MT-10 was the first motorcycle soviet with 12 volts of electricity.

The Dnepr is famous for its off-road capability. Models of service in the Armed equipped with sidecars had two-wheel drive and up to 15 cm (5,9 in) height above the ground. This engine is a 650 cc OHV boxer twin . The modern models are sold with engines ranging from the factory standard 650 to 750 and 1,000 cc. These motorcycles have featured in many films like Indiana Jones and used prominently in the movie Garden State , with Zach Braff. Between 1973 and 1979 Dnepr was one of the brands marketed by Satra in the United Kingdom as motorcycles cossacks. Since the demise of the U.S.S.R. the factory had fallen on very hard times. The production fell to only remains of former glory. All the shops were closed, and machine tools were taken out of the city limits.