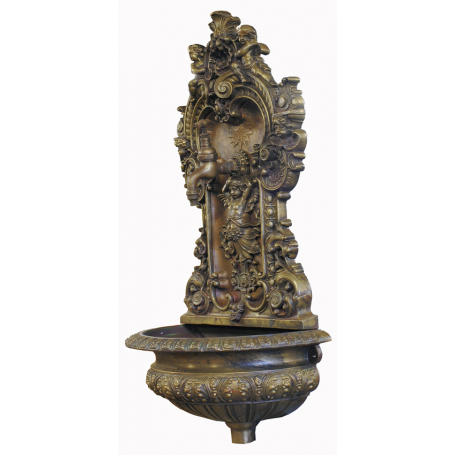 This fountain, made of bronze, was created to go attached to a wall, and has been equipped with a faucet.

Magnificent bronze fountain, to which has been added a tap to close the passage of water. Highlights the piece by its material, and also for its size.

The decoration that adorns it is composed of numerous elements drawn from classical Antiquity, reinterpreted. The putti, or cupids winged of the upper flank and holding a scallop, classical element that has been slightly modified. The curved elements that topped the fountain at the bottom are extracted from the architecture, but in Ancient Rome were not presented in this way. The delicacy of the two heads of cupids of this area we refer to models of the renaissance period. Holds the faucet another Putto more: the lower part of this human figure is an architectural element of fine lines with many curves, and the delicacy of the fabric that brings in the waist and the asymmetry and the movement of the same may be referred to as models of baroque or rococo.

This variety of decorative elements has been superbly located, in a way that would not lead to a set recharged in excess of and that stands out for its symmetry. The diverse origin and influence of the same, in spite of sending all to classical models, situates the work in the NINETEENTH or TWENTIETH century.

In the NINETEENTH century there emerged a taste in Europe for so-called styles historicist. Trying to revive the Medieval art, the Renaissance, the Baroque, etc., in the known as Neos (neo-Gothic, neo-romanesque, etc).

This kind of works were very required to decorate gardens, homes of characters from a social class very well-to-do. It was as clients of these pieces to nobility and high clergy, but also to a bourgeoisie that began to arise with the industrial development and that, on occasions, managed to a few large fortunes.