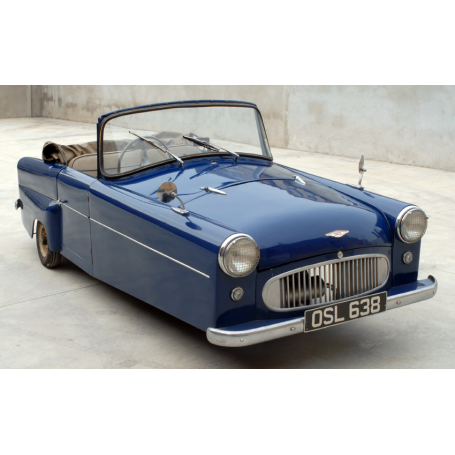 Bond Minicar is the name given to a series of economic cars with three wheels made by advertising Sharp Ltd (The company was renamed Bond Cars Limited in 1964), in Preston, Lancashire between 1949 and 1966.

The basic concept for the minicar was derived from a prototype built by Lawrence "Lawrie" Bond an engineer from Preston. During the war, Bond had worked as an aeronautics designer for the Blackburn Aircraft Company before establishing a small engineering company in Blackpool, aircraft manufacturing, and vehicle components to the government. After the war he moved his company to Longridge where he built a series of small racing cars that are innovative, that they ran with a modest amount of success. In the first part of 1948, he revealed the prototype of what was described as a new minicar to the press.

Described as a "runabout short radius, with the purpose of shopping and calls within a radius of 20 to 30 miles", the prototype was demonstrated climbing a 25% gradient with driver and passenger aboard. It was reported that a 125 cc (8 cu in) Villiers two-stroke engine with a gearbox of three speeds, a dry weight of 195 pounds (88 kg) and a cruising speed of around 30 mph (48 km / h). At the time of the report (may 1948), it was stated that production is "expected to start within three months". The prototype was built on the premises of Bond in Berry Lane, Longridge where it is now commemorated with a blue plaque .

Ads Sharp was a company contracted by the Ministry of Supply to rebuild military vehicles. Knowing that the Ministry were ending their contract in 1948, and the recognition of the limitations of their existing works as a basis for the mass production , Bond approached the director general of Sharp, lieutenant-colonel Charles Reginald 'Reg' Gray, to ask if he could rent the factory to build your car. Gray refused but said that in its place, Sharp's could manufacture the car for Bond and the two came to an agreement on this basis. Bono did some more development work on the Minicar, but once the mass production is on-going, abandoned the project and sold the design and rights to Sharp's.

The engine bay of a 1959 Minicar Mark F. Note the kick-start to the left of the engine. These were fitted for emergency use although all Miniautos started from the driver's seat.

The prototype and early cars utilised stressed skin aluminium bodywork, though later models incorporated elements of steel chassis. The Minicar was one of the first cars in britain to use glass fibre body panels.

Although it retains much of the original idea of Lawrie Bonus of a light weight, vehicle, simple, economic, the Minicar was gradually developed by Sharp's through several different embodiments. Most of the cars were convertibles , although later, hard top offered models, along with van and estate versions. Miniautos were generally available in standard form or deluxe, although the distinction between the two was in general one of the mechanical details rather than a luxury. The cars were powered initially by a single-cylinder two-stroke Villiers engine of 122 cc (7 cu in). In December 1949 this was upgraded to a 197 cc (12 cu in) unit. The engine was further improved in 1958, first in a single-cylinder 247 cc (15 cu in), and then to a 247 cc (15 cu in) two-cylinder Villiers 4T. These air-cooled engines were developed principally as units of motorcycles and, therefore, had no reverse gear. However, it was a minimum of inconvenience, because the engine, gearbox and front wheel were mounted as a single unit and could be turning by the steering wheel up to 90 degrees to each side of the operating position in a straight line, which allows the car to turn within its proper length. A method for reversing the car is offered in the later models via a reversible Dynastart unit. The unit Dynastart, which doubled as both starter motor and alternator on these models incorporate a built-in switch of investment from the solenoid. After stopping the engine and operating this switch, the Dynastart, and in consequence the motor turn in the opposite direction.

Saloon and Tourer production ceased at the end of 1965, while production of the Ranger, and the Estate ended in the spring of 1966.

7 other products in the same category