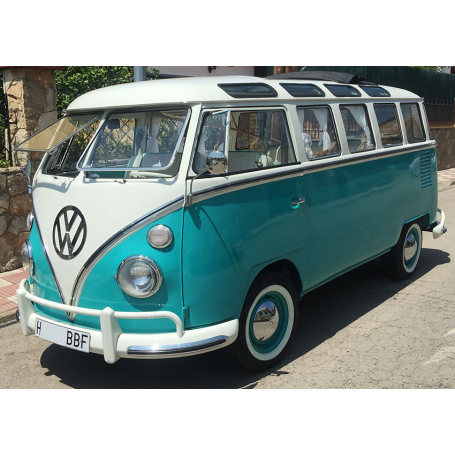 The Volkswagen Samba , known in the united States as Sunroof deluxe, was the most luxurious of the Volkswagen Type 2 T1 (Transporter). The Samba was brought to production from 1951 onwards.

Year 1st registration: do you???? Mileage in: kilometres

Originally, the vans of Volkswagen is classified according to the number of windows they had. The model in question here had 23 windows. To distinguish between the 23-ramer ordinary and the luxury version, they invented the name Samba .

The Samba has two swing doors on the side instead of a sliding door . In addition, the Sambas had a sunroof made out of fabric that could be opened and on the sides of the roof had panoramic windows. Volkswagen announced at that time to suggest that the Samba could be used for tourist trips through the Alps . The Sambas were made popular as buses, hippies in the sixties .

The Samba was sprayed in two colors as standard. Usually the top was white and the bottom part colored. The party-coloured were separated by a decorative strip. In addition, the bus had a so-called "cap". This means that the roof went a little beyond the windshield. The windows were frames chrome and the car had a board longer than the T1 of normal.

The idea of Samba was launched when Volkswagen took to the successor, the T2, to the production.