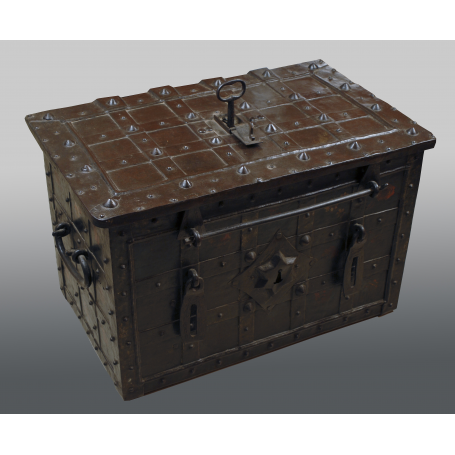 Cash box of the mid-sixteenth century with lock in perfect condition, made of wrought iron decorated by polychrome. In addition to its solid structure, the box is reinforced by iron bands spiked to the outside. The articulated lid, joined to the box by solid hinges, shows in its inner part a complex mechanism of opening of security.

In the cash boxes of this time, it was common for the system to be left in sight, even decorating with applied and fretted motifs. Within the production of safes, those of German manufacture were the most appreciated, especially for their solidity and the completeness and safety of their closing mechanisms. On the outside, the box shows two mobile handles on the sides and, on the front, a complicated locking system consisting of a lock shield and a pin in the upper area, which would be secured with the two latches fixed on the sides. On the lid there is a secret lock, which is hidden by an iron plate. Inside there is a small side compartment, with its own lock. Although this type of boxes were mainly functional objects, in the case of this example the decorative aspect has also been taken care of. Thus, the spiking of the iron bars has been used, and the lock shield has a raised profile in the shape of a six-pointed star. Particularly outstanding is the polychromy of the background, with naturalist flowers painted with a care similar to that of contemporary easel painting.