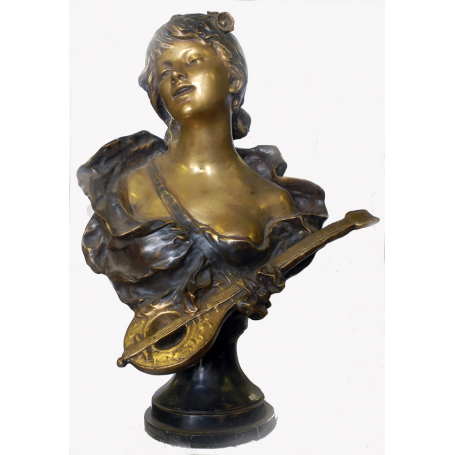 Bust in patinated bronze art nouveau style. The delicacy of the work and its quality are remarkable.

Patinated bronze and pedestal of marble.

In Belgium and France was called Art Nouveau to that in Spain and Latin america are met, more or less, as Modernism. It is a power that defended the artistic renewal and was developed between the end of the NINETEENTH century and early TWENTIETH century.

The above-mentioned characteristics are to be found in the present work: the wardrobe of the young is full of curved lines, that will bring movement. This is delicate, and is accentuated by the posture of the girl's head and her neck.

The transition from the bust to the base has been softening, hiding at first sight the top of it. This detail has a great tradition in the History of Art: presented in masterpieces such as the bust of Louis XIV Bernini, preserved in the Palace of Versailles.

The attribute image that allows us to identify the image as an Allegory of the Music is in the foreground, well highlighted thanks to the position of the same and the game with the patina that the artist has performed.

Interestingly, the same elements and some similarity is found between this piece and another Allegory of the Music done by Hans Muller, sculptor, austrian, known for his portraits and busts of the high society of Vienna. The style between the two busts is, however, radically different.