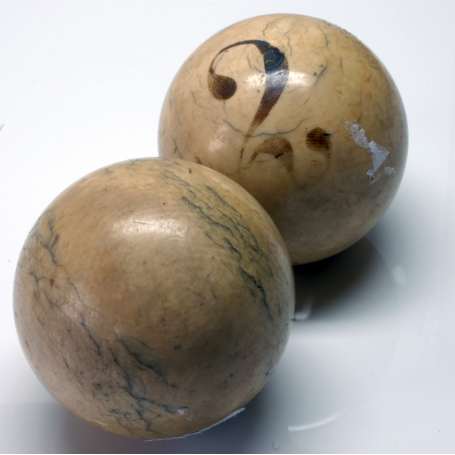 Measures: 8 cm in diameter each.

Can be found the beginnings of billiards in Greece and Ancient Egypt, although it is in Europe, in the FIFTEENTH century, when it begins to look like the current. It is somewhat uncertain, the invention of the game more or less as is now known: it could be your inventor Henry Devigne, a craftsman of Louis XV; or maybe it was the English Bill Yar. We have data of the treaty of Gaspar Gustave entitled “mathematical Theory of the game of billiards” in 1835, and of the celebration of the first official championship in the Uk in 1835.

The present lot shows an incomplete game of balls of ivory, used to play billiards Plated. On a large table with pockets, is placed in the centre with five chopsticks with a different value. Wins the team or player that first reaches 30 many or throw all the sticks in a field.

The balls of ivory are used in this sport until the mid-TWENTIETH century, which were then replaced by synthetic materials such as bakelite. The ivory, aside from the drawback of its high price, it was a material that underwent change with the time and atmospheric conditions to which he was exposed, by deforming the line of the ball.