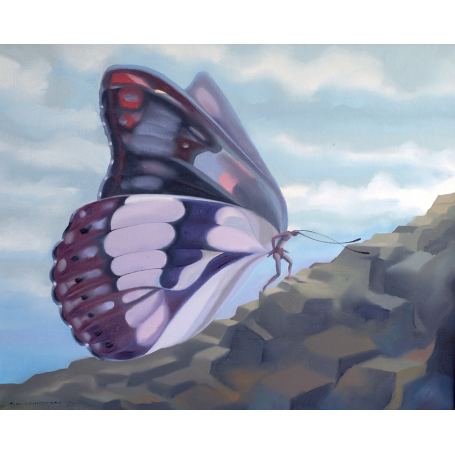 Oil on canvas. “Legend of Isifo”

Dedicated and dated 1988 back.

Josep Pla-Narbona (Barcelona, 1928) is a graphic designer, draughtsman, printmaker, sculptor and Spanish painter. During his entire life has counted the graphic design with the art.

The consolidation as a designer and artist, The years between 1960 and 1975 were the best of his career as a designer and draftsman, allowing you to reach an international consolidation. A time dedicated to the research on the graphic design and its expressive resources. He was a pioneer of this discipline in Spain. His work has a great personality graphic sought intentionally, as it was intended to be recognized by your style. Pla-Narbona was devoted to the construction of his personality graph since I returned from Paris and he did this through media, such as illustration, pharmaceutical (Sandoz Laboratories, Laboratories Uriach), editorial illustration and poster social interest. The latter was the more efforts devoted to these years. His identity project for the company-devices, high-fidelity Industries COSMO is a flagship example and a pioneer in corporate identity in Spain. In terms of the graphical investigation, the ads in COSMO, as well as those designed for socks JORIGU, constitute a maximum exponent of surrealism, including photographic material. Also noteworthy is his use of black spots, by contrasts between form and figure, or with the qualities of material of the black by cutting or tearing papers. Example of this are posters such as: Flies, Ronda de Mort a Sinera, Holy Week. His work can be appreciated also in the headwaters of newspapers such as the missing Tele/eXpres, or on covers for publishers as important as the Destination or Alfaguara. He founded and directed the magazine Azimuth (1966) and has published several technical papers and theoretical. He has illustrated, among others, works of Espriu, Pedro Salinas, Cela and Damaso Alonso, and he did the scenography of The flies, Sartre (1968), directed by Ricard Salvat. In terms of drawing and printmaking, per year in 1964-66, developed its first stage fully personal, in that his figures are converted already in fantastic.

Maturity. The color to paint In the next stage (1967-69) the figure is deformed and becomes fragmented, the eroticism is more patent, and the composition becomes baroque (series Triumfalismes, 1969). During their stay in the united States in 1969 he exhibited at the Gallery, Terry Dintenfass, New York, and made a series of lithographs in San Francisco for Colectors Press. Later in 1972, exposed in Chicago prints and drawings. New basic elements are listed below: the walls that compartmentalize their fantastic beings and monstrous (series Critical of the hypocrisy, 1972). This is the moment when the figures merge with the landscape (Landscapes, anthropomorphic, 1972) and starts at the same time his activity as a sculptor, where you can give substance to the theme of the masks, which had already previously worked in two dimensions. In the mid-seventies started his career as a painter, giving prominence to the color, and with an important presence of strange beings. It is in recent years when the field, the flowers, the horizon or the clouds are incorporated to bring warmth and hope. From ideas of the poet Joan Brossa, and in collaboration with him, developed the design of the sculpture in the shape of a grasshopper (llagost) that culminates the facade of the building of the School of Aparejadores and Technical Architects of Barcelona (1993) and the sculpture in the form of tentetieso (1994) Tribute to the book of the Guild of Booksellers of Old Barcelona located on the Paseo de Gracia.