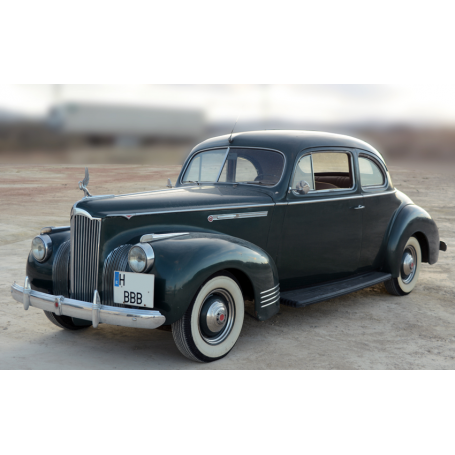 1941 packard 120 19th series club coupe it runs like a clock and drives very easy! it truly is one of the finest examples rare even in the market!. Original Interior. This amazing car has been kept in its original state. Comes equipped with your motor 3878cc 6-cylinder transmission 3-speed, all-in-one wheel base of 120 inches. Excellent acting ?? driving in silence and without problems. We are proud to offer this magnificent Packard Club Coupe to a collector, investor or enthusiast more sophisticated that it understands and appreciates the investment potential of this great american classic.

This was the last car produced before the war, and their headlights integrated were a departure remarkable and elegant of the previous models of Packard. The 6-cylinder engine is mated to a smooth three-speed manual transmission. All components are in their original state. Packard was the first automobile manufacturer to offer air conditioning, even though it was a drive, something primitive. The interior still retains original. Yes, the state of the painting is evident, but it has a no-oxide to a perfect restoration project in an exceptional piece and very difficult to find...

Returning to the model range of Packard One-Twenty continued to be offered in a wide range of body styles, from coupe to Touring Limousine, with prices for the model range between $ 1,099 and $ 1,856. New for the year was the introduction of the change of the column (known in the language of Packard as Handishift), andliminó the shift lever down. Introduced in September of 1938, they built a total of 17,647 units.

In 1939, the company introduced a fifth shock absorber cross in the 120. It also provided a synchronous transmission of four-speed Unimesh Packard, the same as in the Twelve (and is already standard on the Eight ) , as well as the new overdrive Econo-Drive fourth gear, claim to reduce the speed of the motor in a 27.8% and could get caught at any speed over 30 mph (48 km / h).

The series name One-Twenty officially became the screenplay for the model year 1940. Once more, the One-Twenty included a large variety of body styles, including a Victory convertible semi-custom of Howard "Dutch" Darrin . Introduced in August 1939, the total production of the model year was 28,138 units.

In his last year as a model, the One-Twenty has lost several body styles to the line of cars One-Ten extended. The One-Twenty was available in coupe business, club coupe, two door sedan, four-door sedan, coupe, convertible, sedan, convertible and two styles of vans . The production sank to 17,100 units.

For 1942, the One-Ten and One-Twenty were discarded as model names and their models folded into the lines Packard Six and Packard Eight. In his seven years in the alignment of Packard One-Twenty saw a total production of 175,027 units.

8 other products in the same category