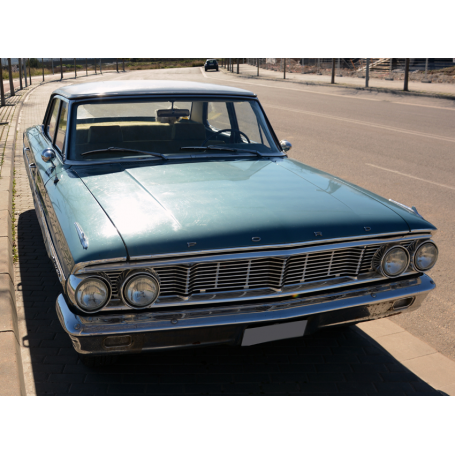 Type of change: automatic. Change in the steering wheel.

Such as it is. Budget custom restoration in our workshops.

In a working state.

The Ford Galaxie or Ford Galaxy, it was a car full size manufactured in the united States by the Ford Motor Company, went on sale in 1959 and was discontinued in the year 1974.

The name was used for the top models in the variety of natural size of the Ford from 1959 to 1961, in an attempt of marketing to appeal to the excitement surrounding the space race. In 1962 all Ford full-size led start-the flagship Galaxie, "500" and "500/XL" denotation of the most high. 1965 saw the introduction of the Galaxie 500/SA, followed by Galaxie 500 7-litre in 1966. The Galaxie 500 part was released the series LTD in 1966, and from the XL in 1967; however the basic series structure levels were maintained. Galaxie "regular" 500 continued below the Denimacion LTD to the Ford of the normal size of 1965 until the end of its manufacture, the model year 1974.

The Galaxie was the counterpart of the high-volume Chevrolet Impala. Some Galaxies were high-performance machines of competition, an ancestor of the largest era of the muscle car. The others were sedans.

There is a Ford Galaxie, a car/minifurgoneta large available on the european market. The name of the vehicle is taken from the original Ford Galaxie. It should be mention that he also competed in the NASCAR series between 1959 and 1974.

1959 saw the introduction of the Galaxie in the line of Ford models in the mid of the year. That year, the variety of the Galaxie was available in six models. Were versions simply high-quality Ford that competed with the Ford Fairlane, and with a roofline that mimicked the Thunderbird. According to the age, Galaxie 1959 was a vehicle made of plated steel and painted in two colors. This was the same image of car of american of the late 1950s, although somewhat submissive, that their competitors Plymouth and Chevrolet.

Among the models was the Skyliner, featuring as a convertible, hard-top retractable that it folded in the trunk space; this option, room trunk it left a very small space. It was impressive but complicated, expensive, and damaging to him with the folded soft top, did not last long, being produced from 1957 to 1959. The power convertible hard-top retractable have since been used by luxury manufacturers such as Mercedes-Benz, Lexus, and Cadillac, but in all these cases the vehicle was a two-seater, allowing a mechanism upper much smaller than the Skyliner. Not before 2006, when it appeared the Pontiac G6 convertible, made another model of public market with a rear seat appear in this category.

Also, this vehicle has not only been the individual car, but which is also the transport used by the president of the Republic of Chile, in the official ceremonies more important. The vehicle was a gift from queen Elizabeth II of England. In addition to transporting the president of Chile and the ministers of the Interior and National Defense, has moved, among other personalities, the cuban leader Fidel Castro, prime Minister of India, Indira Gandhi, and the poet Pablo Neruda. This vehicle broke the tradition of the chilean use of carriages in the ceremonies of transfer of power, which was maintained until 1970.