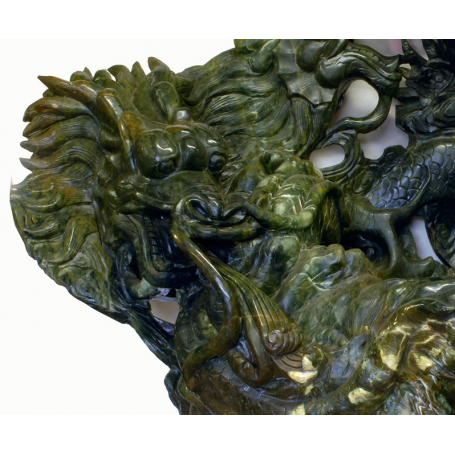 Great bowl carved (front of fountain) with motif of dragons, eastern mythology, with some small damage on some scale of dragons and the very small part of the base (see photo). Circa: 1980. Measures: 160x210x110 cm Approx. Weight: 1500Kg approx.

A substantive variety, hard and compact of serpentine found in Rhode Island, Afghanistan, china, New Zealand, USA. It is of a light green color and resembles jade.

The word jade refers to two different minerals, jadeite and nephrite, both of the group VIII (inosilicatos), according to the classification of Strunz. To be considered as a jade, both must be present as aggregates in form of granules, very fine or interwoven fibers. The jadeite form is only very rarely true crystals. The jade is often of a greenish hue due to impurities of chromium. A stone that was used by the Mayans as an important stone in their culture.

The jade used in China and Mesoamerica as a material for the manufacture of utensils and ornaments for over 5,000 years. Over time we developed a real cult of jade. Objects of jade had (and have) fame of amulets to attract the luck. In its origins, jade was so tough and resistant as any other material. For this reason it is also used to produce tools and weapons.

Almost from the beginning he tried to sell other minerals under the name of jade, which was achieved with the mineral called serpentine ("china jade", "jade " new"). The streamer not only has the same appearance as the jade, but appears in the same reservoirs that jadeite and nephrite. It is a material softer and less resistant than the jade. How it works much better than the jade, which has been established as a substitute preferred in the last few years.

In the valley of the Motagua River in Guatemala, is one of the richest deposits in the world, and is the source of the colours that are more novel, such as the jade rainbow, the jade black and the 'gold galactic, which is a jade black inlaid with natural gold, silver and platinum.

According to the chinese mythology the jade is the sperm dry dragon.

For the pre-hispanic cultures in Mesoamerica as the olmecs, mayas, toltecs, mayas, mixtecs, zapotecs, and aztecs; the jade was the stone of creation, it meant life, fertility and power. It was even more valued than gold. Is obtained of the Valley of the Motagua, Guatemala (Area of the Fault, Motagua). This region has been confirmed as the source of all the jade used by the mesoamericans for 3,000 years.